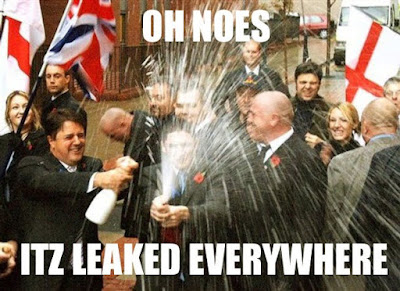 “The fact that we have teachers and doctors and women that knit, it’s a fantastic event politically for us. It’s going to show people that we’re not a bunch of skinhead morons, which is the left-wing media-created image.” ~ Nick Griffin

Police reveal identity of PC on BNP list
The Press And Journal
November 20, 2008

A serving police officer facing investigation after being included in a list of British National Party members was last night named by Merseyside Police. Steve Bettley was in a list of thousands of BNP supporters which was leaked on an internet blog. His name was part of the main entry of a family member…

Pc on BNP member list suspended, BBC, November 20, 2008: A Merseyside Police officer whose name was included on a list of British National Party (BNP) members has been suspended from duty. Pc Steve Bettley was listed in a leaked membership document published online. Merseyside Police specifically bans all its officers from membership of the BNP, Combat 18 and the National Front…

A retired teacher was wakened in the middle of the night and threatened and called a “Nazi pig” after his name appeared on a list of British National Party members posted on the internet. The man was one of almost 120 people from the north and north-east linked to the far right organisation by the leaked document. Last night, the 63-year-old denied he was a member of the party and said he knew nothing about his name being included in its membership list until he was contacted by the media. The man – who lives in Aberdeenshire but asked not to be identified – said he had attended a BNP event during the run-up to council elections, during which one of its candidates gave a speech…

Right-wing extremists across Britain are bracing for violent repercussions after the British National Party’s entire membership list was leaked on the internet. And tech-savvy web users plotted members’ addresses in red on a Google Map… Ironically, the BNP is relying on Britain’s Human Rights Act, which it opposes, to protect the privacy of its members…

Rod Lucas: ‘I only joined BNP for a story’. (He also only invited Nick Griffin on his show for teh lulz.) There is also a statement on his ‘OFFICAL’ website.

Royal flunkeys and men of God

TWO Royal servants were among 12,000 people named yesterday on a secret list of British National Party members. Buckingham Palace storeman Paul Murray, 52, and a retired palace porter are both on the roll of shame. The naming of the two trusted aides is a massive embarrassment for the Royals… A vicar, the Rev Dr Paul Barker, has threatened to sue the BNP for failing to keep his details safe. BNP leader Nick Griffin admitted the list was genuine, saying it contradicted the idea that the average member “was a skinhead oik”. Home Secretary Jacqui Smith insisted the fact that many BNP members were unhappy to be outed showed how shaming it was to be linked with the party.

MORE than 170 people from North Wales were named as members of the far right British National Party on a leaked membership list. They include a former police officer, an ex-Tory councillor, a former social worker, a former North Wales Ambulance worker, and a Christian lay preacher…

A RETIRED police chief inspector has been exposed as a BNP member. Scots pensioner Charles Reid‘s name was on a list of activists leaked on the internet this week. But when the Record contacted him, he tried to distance himself from the racist British National Party. Reid, from Glasgow, said: “I’m not answering any of your f***ing questions. I haven’t been a BNP member for three years. I’m not telling you whether I was a policeman – it’s none of your business.” Reid changed his story when he called back, saying: “I am not a BNP member – I went to a BNP meeting once to find out what it was all about and I might have put my name down somewhere.”

…Among the Australian BNP members is former One Nation candidate for the South Australian Federal seat of Boothby [and South Australian Scrabble champion], Daniel Piechnick, who is described as an “activist” on the list. [In 2001, Daniel gots 2,151 votes, or 2.63%; a reduction of 4.13% from 1998.]

Mr Piechnick, a 28-year-old web designer, told The West Australian yesterday his one-year membership of the BNP had expired and that he had joined the BNP only so he could study the way the party functioned.

“BNP was like One Nation but it was properly run and had a sensible leader,” he said. “It’s what One Nation should’ve been if One Nation had been more like the BNP, it would have been very successful.” Mr Piechnick said he did not agree with all of BNP ’s policies, but he said: “Immigration is not being managed properly, you can have immigration but if it’s too fast and it’s all to one place there’s not enough capacity for assimilation.” Alex Trussler, an English migrant and now a Sydney plumber, said he was not ashamed of his BNP membership, arguing right-wing political groups were on the rise around the world and Australia was no different.

British-born Queenslander Arthur Grice, 59, said he was also very proud of being a BNP member: “It’s got nothing to do with race, it’s a culture thing, about being British,” he said.

Nazis. I hate those guys. 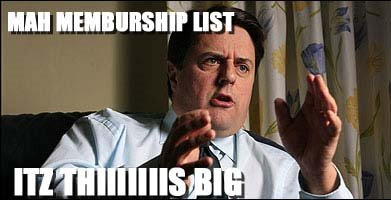 About
Nick Griffin has lost his membership list. Let us LOL at him. Idea started by Chris aka @qwghlm on Twitter. Some are by him, the rest by anonymous friendly contributors (you can tell which ones they are as they’re actually funny). Show us your LOLGriffins: use the hashtag #lolgriffin on Twitter and we’ll see it.