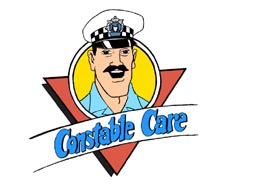 Huh. I only just found this one. Funnily enough, the “I Hate Victoria Police” Facebook page which is mentioned later in the article and is (apparently) the subject of possible legal action by the police union was identified as being objectionable by 3AW’s Neil Mitchell last month. In October 2007, on the eve of the last Federal election, the “millionaire blabbermouth, professional boofhead and Liberal Party poodle” expressed support for then-Minister for Immigration & Citizenship Kevin Andrews when Andrews announced an end to immigration of black refugees from Africa. This Thursday, March 18, local Community Legal Centres will release a “damning” report into ‘Discriminatory Police Treatment of African Young People’. The launch of the report will be held at 5.30pm, on Thursday the 18th of March at the Multicultural Hub, 506 Elizabeth Street, Melbourne. Read the press release here and here.

A ROGUE Facebook page claiming to be an official Victoria Police website is being used by gay men trawling for sex and by cop haters accusing police of corruption.

It also has photos linking police to a religious group and hyperlinks to a racist thug’s website.

The website carries comments from people accusing police of everything from lying under oath to using torture as a means of investigation.

Police Association secretary Sen-Sgt Greg Davies labelled the website a disgrace. “It’s ridiculous that every halfwit who feels like it can defame police officers on what appears to be an official police webpage,” he said.

Unlike other obvious Facebook hate pages aimed at police, the rogue Victoria Police page appears to be fooling some users into believing it’s the real thing, with some posting messages of support for police.
A police spokesman said police would investigate the website.

“Like all user-generated websites, we have no editorial rights over its content,” he said. “However, abusive or illegal material will not be tolerated. We will have a look and any serious abuses will be reported to Facebook administrators for removal.”

The site’s administrator could not be contacted by the Herald Sun.

The discovery of the site comes just weeks after the Police Association threatened legal action against the creators of a Facebook site promoting violence against police.

More than 5000 people have joined the “I Hate Victoria Police” site since it was set up last August.

“The men and women of Victoria Police do a fantastic job putting the interests of the Victorian community first in order to help protect them,” he said.

Launched in March/April 2009, Victoria Police Forcebook has just over 1,500 members. At present (that is, prior to its removal), “I Hate Victoria Police” has over 5,400.

I live in Melbourne, Australia. I like anarchy. I don't like nazis. I enjoy eating pizza and drinking beer. I barrack for the greatest football team on Earth: Collingwood Magpies. The 2021 premiership's a cakewalk for the good old Collingwood.
View all posts by @ndy →
This entry was posted in State / Politics and tagged Cops Are Tops!, Facebook, I Hate Victoria Police. Bookmark the permalink.