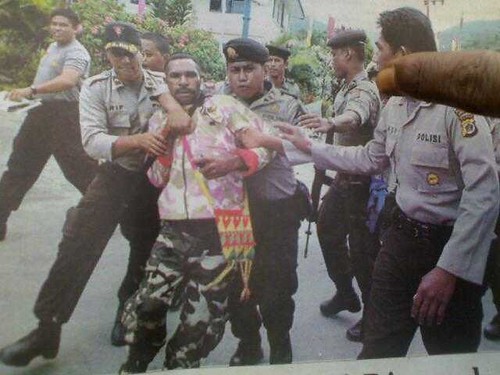 Deputy chief of Jayapura Police, Adj. Comr. Amazona Pelamonia, said the protesters had requested a permit to stage a protest related to US President Barack Obama’s visit but their speeches had called for a referendum instead. “Since Obama’s visit has been postponed, the protest is no longer relevant. Besides their speeches call for referendum, so it’s a totally different agenda,” he said.

“Although they have a permit, their protest disrupts public order so we have to break it up.”

According to Bintang Papua, at least 28 Papuans were arrested for taking part in a demonstration in Jayapura [on] 22 March. It also reported that demonstrations were also held in several other cities, Sorong, Manokwari, Wamena and Serui.

It was an action co-ordinated by the KNPB, the National Committee of West Papua. The chairman of the KNPB, Buchtar Tabuni, who is serving a three-and-a-half year sentence in Abepura Prison, was reported as saying that these were peaceful demonstrations which had taken place according to the organisation’s intentions. ‘They are taking place according to my directives. If the police need any clarifications, they should ask me,’ he said…

I live in Melbourne, Australia. I like anarchy. I don't like nazis. I enjoy eating pizza and drinking beer. I barrack for the greatest football team on Earth: Collingwood Magpies. The 2023 premiership's a cakewalk for the good old Collingwood.
View all posts by @ndy →
This entry was posted in State / Politics, War on Terror and tagged West Papua. Bookmark the permalink.