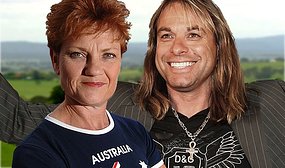 The strange electoral race in the Queensland seat of Beaudesert has taken another twist, with former Australian rules footballer Warwick Capper failing to nominate by today’s deadline. Mr Capper yesterday claimed he was planning to run but his name does not appear on the Electoral Commission’s list of candidates. The Greens, the Daylight Saving Party, former Brisbane Broncos rugby league player Keith Gee and former One Nation leader Pauline Hanson are all running in Beaudesert against the major parties.

I live in Melbourne, Australia. I like anarchy. I don't like nazis. I enjoy eating pizza and drinking beer. I barrack for the greatest football team on Earth: Collingwood Magpies. The 2020 premiership's a cakewalk for the good old Collingwood.
View all posts by @ndy →
This entry was posted in !nataS, State / Politics. Bookmark the permalink.