1. Building Australia Party : These blokes wanna build stuff. But government red tape stops them. If you wanna help build a BETTER Australia, Vote 1 BAP in Bennelong, Greenway, Macarthur in NSW and in the NSW, SA and VIC Senates.
2. Ecological Social Justice, Aboriginal Party (WA) / First Nations Original Peoples Party (NT) : Apparently, the two have amalgamated, and “[t]he united party has swelled its membership to over 2,000 members and intends to attain 5,000 members by the year’s end.” The ESJAP is standing Gerry Georgatos, Bill Hayward, Marianne Mackay and Lara Menkens for the WA Senate. Dot Henry is standing for the party in Hasluck and Geoffrey Stokes in O’Connor. In the NT, Maurie Japarta Ryan and Ian Lee want a seat in the Senate, while Kenny Lechleitner is looking to the Lower House seat of Lingiari.
3. Republican Democrats : Michael (Ghillar) Anderson was a Greens candidate in 2004; he’s standing (as Michael Eckford) alongside Criselee Stevens for the Republican Democrats in the NSW Senate in 2010.
4. Stable Population Party of Australia : “Our candidates are now standing as a group of Senate independents in column T on the ballot paper. We are: William Bourke – Businessman and Stable Population Party convenor; and Mark O’Connor – Writer and Co-author of Overloading Australia.”
5. WA First : NOBODY expects WA First… to er, win. Their chief weapon is Scott Cowans… Scott Cowans and John Goodlad… John Goodlad and Scott Cowans… Their two weapons are John Goodlad and Scott Cowans… and James Versteegen… Their three weapons are John Goodlad, Scott Cowans, and James Versteegen… and an almost fanatical devotion to WA… Their four… no… Amongst their… Amongst their weaponry… are such elements as John Goodlad, Scott Cowans… I’ll come in again.

Gone but not forgotten… 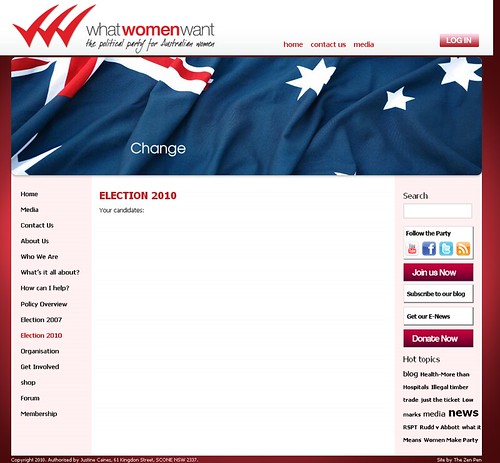 I live in Melbourne, Australia. I like anarchy. I don't like nazis. I enjoy eating pizza and drinking beer. I barrack for the greatest football team on Earth: Collingwood Magpies. The 2021 premiership's a cakewalk for the good old Collingwood.
View all posts by @ndy →
This entry was posted in State / Politics and tagged 2010 Australian Federal election. Bookmark the permalink.