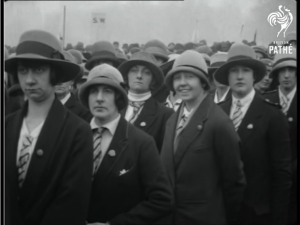 On this week’s episode of Yeah Nah, we talk to Julie Gottlieb [Twitter]. Julie is Professor in Modern History at the University of Sheffield and the author of Feminine Fascism: Women in Britain’s Fascist Movement, 1923-1945 (I. B. Tauris, 2021), a new edition of which has just been published.

The British Fascisti, the first fascism movement in Britain, was founded by a woman in 1923. During the 1930s, 25 per cent of Sir Oswald Mosley’s supporters were women, and his movement was ‘largely built up by the fanaticism of women.’ What was it about the British form of Fascism that accounted for this conspicuous female support? Gottlieb addresses these questions in the definitive work on women in fascism.

This book continues to fill a significant gap in the historiography of British fascism, which has generally overlooked the contribution of women on the one hand, and the importance of sexual politics and women’s issues on the other. Gottlieb’s extensive research makes use of government documents, a large range of contemporary pamphlets, newspapers and speeches, as well as original interviews with those personally involved in the movement.

This new edition includes a preface analysing the current affairs of the last 20 years, reframing the book according to contemporary context. Here, Gottlieb looks at the resurgence of populism, the rise of women as leaders of far-right parties across Europe and North America, and the normalisation of fascism in fiction and political discourse.

• Please note that the podcast version of this episode contains a longer discussion with Julie.
• You can listen to the podcast on Apple, Spotify and other platforms.
• We also have a Facebook page for the show, which you’re invited to ‘Like’ and to ‘Follow’.
• I have a Patreon account which youse are also invited to support.

I live in Melbourne, Australia. I like anarchy. I don't like nazis. I enjoy eating pizza and drinking beer. I barrack for the greatest football team on Earth: Collingwood Magpies. The 2021 premiership's a cakewalk for the good old Collingwood.
View all posts by @ndy →
This entry was posted in Anti-fascism, Broken Windows, History, Sex & Sexuality, State / Politics, That's Capitalism! and tagged 3CR, Feminine Fascism, Julie Gottlieb, Yeah Nah Pasaran. Bookmark the permalink.