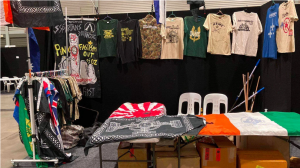 Supanova Comic Con & Gaming has been the welcoming home of Australia’s pop culture fandom since 2000; a place where fans inspired by imaginary worlds emanating from comics, sci-fi, fantasy, anime, gaming, nostalgia and literature have been able to come together to celebrate. A place to rejoice in cosplay (‘cos’tume role-‘play’) in expressing your inner geek, your inner child.

Supanova was founded and is run by a bloke called Daniel ‘Y U No Like Safe Schools’ Zachariou.

Anyway, the Sydney leg of Supanova (June 19/20) generated some (further) controversy after it was revealed that a batsh!t exhibitor called ‘Celtic Panzer’ was selling racist and ‘nazi’ paraphernalia. This was apparently brought to the attention of expo organisers on Friday evening, but it was seemingly only after word leaked on social media that on Sunday the Panzer division was eventually asked to pack up their troubles in their old kit bag and resile, resile, resile.

While unreferenced in the Kotaku report, ‘Celtic Panzer’ is boomerwaffen cartoonist Mike McGann, who’s been pumping out propaganda for the ‘anti-immigration’ — that is, white nationalist — ‘Australia First Party’ (AFP) for some years now.

Mike’s cartoons have expressed a certain, ah … antipathy … towards Teh anTEEfas. Thus, in response to a cartoon promoting opposition to the ‘Reclaim Australia’ rally in Sydney in April 2015, Mike — as the ‘Kooky Koalas Kollective’ — produced a cartoon for the AFP featuring a version of the same woman — tied up, and with her baseball bat shoved into her mouth — and a ‘Kooky Koala’ quipping ‘Well, Try That You Lefty Whore’. Later, again on behalf of the AFP, Mike celebrated the tremendous ‘victories’ Reclaim allegedly won over anti-fascists in 2015, declaring ‘Moslems Out!’, ‘Antifa Out Of Australia!’, and featuring a woman being disemboweled by another ‘Kooky Koala’. These are not the only cartoons Mike has produced for the AFP, but I think they give some sense of his political perspective. 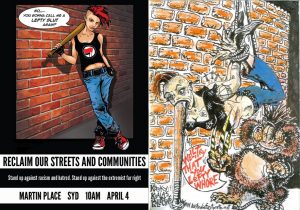 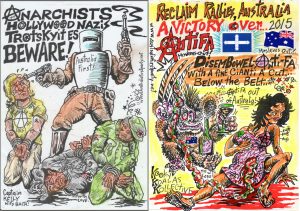 As for Supanova, a number of sponsors and other participants withdrew from the event in the wake of the publicity surrounding the ‘Celtic Panzer’ stoopid, but today organisers published a statement commencing ‘We owe you all a massive apology’. In the meantime, a petition has been launched calling upon Zachariou to stand down. Also:

Kotaku Australia has also seen internal Supanova communications stating that Celtic Panzer, the booth responsible for selling the material above, has been banned from all future Supanova events. The vendor would also be “getting their money back”.

2 Responses to It’s a Nazi Supanova!?!