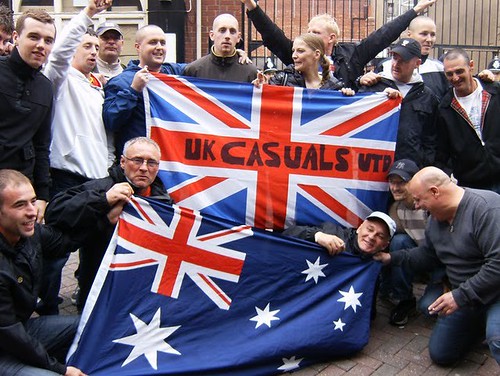 The semi-fictitious ‘Australian Defence League’ (ADL) — yet another bastard offspring of Stephen Yaxley-Lennon‘s ‘English Defence League’ (EDL) — claims to be organising a rally @ the Sydney Opera House on Saturday, October 9 as part of a generally shambolic attempt by the nationalist Right to whip up further public hysteria over creeping Islamisation. Students of Australian history, political philosophy and theology (and their families) are being asked by the EDL ADL to gather together at the world-class performing arts centre in order to contemplate the rally slogan: Australia or Islamania? It’s Our Choice!. Voters in the unauthorised referendum will presumably have to battle crowds of foreign tourists on the day, as well as those queuing to see Thornton Wilder’s 1938 Pulitzer Prize-winning play Our Town, Verdi’s Rigoletto and various other cultural events in order to make their protest count.

The Sydney rally bears an uncanny resemblance to the group’s attempt to organise a rally in Melbourne on Friday, April 9. In both cases, the organisers are anonymous, the location is prominent, and the event is extraordinarily long — in the case of Sydney, six hours. Of course, the Melbourne rally ended up as being a handful of local racists crying into their beer in the pub opposite the site of their proposed demo. Just one (obviously drug-addled) sieg heiling bonehead attempted to pick a fight with the crowd of several hundred who’d gathered in opposition to the League at the centre of their supposed gathering (on the steps of Flinders Street station). In fact, such is the ineptitude with which the the ADL has attempted to organise itself, some on the anti-Semitic Right have accused it of being a front group for ZOG. Notwithstanding the fears of the tinfoil hat brigade, the gross incompetence on display by the League may be more easily explained by reference to its origins.

The ADL was launched as an Internet project by an English expatriate teenager from Perth named Jack *******. Jack must have been sorely disappointed with his magic beans (and who can blame him?), as he’s since attempted to wipe clean his online history. The League, therefore, and such as it is, appears to have become the fevered dreams of another. In this sense, the ADL has had only a vague half-life in Australia. Nevertheless, it has attracted the support of a handful of worried ex-pats, angry Australian yoof belonging to or associated with the ‘Southern Cross Soldiers’ and the tiny membership of the ‘Australian Protectionist Party’. One promotional video — youtube.com/watch?v=LTJOo3Uhclk, produced by a whinging Pom — proclaims that the League operates ‘in the spirit of St George’ (the patron saint of England) in ‘a battle for the very existance of Australia’; the video presents Simon Overland and former PM Keven Rudd as traitors who use ‘Unite Against Fascism’ and ‘Antifa’ as their weapons, in response to which the ADL calls for ‘full and total ressistance’.

The remarkably amateurish nature of its ideological productions and occasional pronouncements on the evils of Islam (and immigration and multiculturalism) suggest that in order to save the whingers from becoming simply another bizarre, failed social experiment, a rich benefactor is desperately needed, but highly unlikely to appear on the scene. In any case, on the same day in Leicestershire, England, the E E EDL is planning on holding a (static) rally. Presumably, many hundreds of police will surround a small group of a few hundred hooligans who will assemble at or near a pub and proceed to get pissed while shouting incoherently about Mooselems; a few angry young men will attempt to break the police cordon (and get arrested), and the rest will be escorted by the filth back on to their specially-hired buses and then home: game over.

Who knows if anyone will be silly enough to rally at the Opera House. 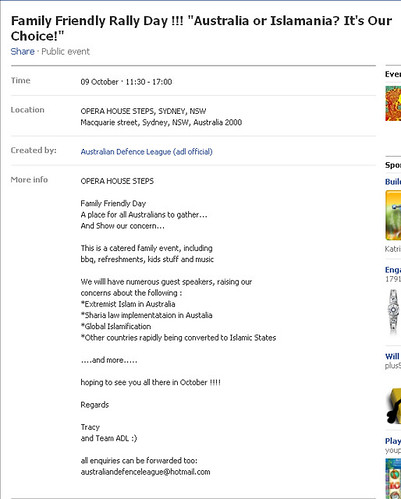 I live in Melbourne, Australia. I like anarchy. I don't like nazis. I enjoy eating pizza and drinking beer. I barrack for the greatest football team on Earth: Collingwood Magpies. The 2021 premiership's a cakewalk for the good old Collingwood.
View all posts by @ndy →
This entry was posted in !nataS, Anti-fascism, State / Politics and tagged ADL, Australian Defence League, Australian Protectionist Party, EDL, English Defence League, Southern Cross Soldiers. Bookmark the permalink.