Protest against Islamic Terrorism[:] exact date and time to be confirmed. Members of the English Defence League and other UK groups will be flying over in support and working closely with our Aussie counterparts to promote this demo against the biggest threat to mankind since the Nazis.

After spearheading a risible attempt to whip up anti-Muslim and anti-immigrant sentiment in Melbourne in April, the keyboard commandos belonging to the ‘Australian Defence League’ (ADL) have declared that they’ll be journeying to Cronulla in Sydney later this year, a few months short of the fifth anniversary of the racist pogrom / ‘White Civil Uprising’. Coming along for the ride will (supposedly) be members of the E, E, EDL, including level boss ‘Tommy Robinson’, and perhaps even an Australian or two, who knows?

As for Mr Robinson, he plays a *ing role in the EDL (English Defence League), a potted history of which was recently published in The Guardian (‘English Defence League: new wave of extremists plotting summer of unrest’, Matthew Taylor, May 28, 2010). “Forged on football terraces and targeting Muslim communities, rightwingers return to the streets in an increasingly violent form” is the byline, a development which, given the overall failure of the BNP at the ballot box recently, poses some interesting questions regarding the future of the British far right.

TBH, I’ve no idea why a racist teenybopper from Perth named Jack wants to import an army of whingeing Poms to protest against “Islamic extremism, immigration and other important issues that concern Australians” (such as, um, “Islamic extremism in our own backyard, uncontrolled immigration, political correctness gone mad and government enforced multiculturalism which creates anger”). Further, it’s extremely unlikely that an ultra-nationalist movement could be forged from among those who occupy Australian football (or soccer, or rugby) ‘terraces’ and — notwithstanding, perhaps, the yoof belonging to such online formations as the ‘Southern Cross Soldiers’ — in the absence of any other equivalent body…

What’s the matter with kids these days, anyway?

The relationship between the EDL and other rightwing groups has been a turbulent one, with the BNP, for example, publicly distancing itself from the organisation, on the one hand, while at the same time having current and former members play key roles within it, on the other. One interesting recent development has been the announcement of a Jewish division (see : ‘Shema Israel!’: The EDL Jewish Division, Malatesta, libcom, June 3, 2010). Otherwise, Malatesta marks the first anniversary of Defensive Manoeuvres in the Park here. 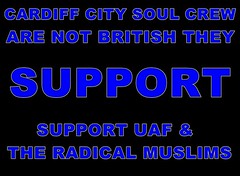 Despite some difficulties, a number of which remain unresolved, the English Defence League appears to be thriving in a way that the ‘Scottish’ and ‘Welsh’ Defence Leagues are not (see, for example : Stunning victory for Scottish Defence League in Edinburgh, February 21, 2010). Thus the uneasy alliance of various football firms which provide the EDL with its foot-soldiers appears to come under greater pressure the further the League moves away from London.*

The protest by the ‘Welsh [sic] Defence League’ in Cardiff on the weekend (June 5) would seem to be a case in point, with members of the ‘Soul Crew’ — a firm linked to the Welsh football club, Cardiff City — being uninterested in joining with the English hools bussed into Cardiff for the occasion (and seemingly only in order to be given a brief, guided tour of the city centre by local police). The League rally attracted perhaps as many as one or two hundred; the counter-rally was several times larger (some sources claiming one or two thousand attended), and seems to have included at least some Soul Crew members. In any event, Viv Smith assumes credit for the debacle on behalf of ‘Unite Against Fascism’ (Socialist Workers Party) in ‘Welsh Defence League forced to retreat in Swansea and Cardiff’ (Socialist Worker, No.2204, June 5, 2010).

See also : Welsh and English Defence League demonstration in Cardiff, Russell Pollard, Demotix.com, June 5, 2010 | Three arrests as rival protests end in Cardiff, BBC, June 5, 2010 | EDL Run Out of Town, Ross Saunders, June 7, 2010. Oh yeah. The WDL tried to stage a rally in Swansea too, but only a handful rocked up, and they only managed to strike a few ‘sieg heils’ before pissing off (anti-fascist protesters having occupied the Square they intended to protest in hours before kick-off).

soul crew the shame of Wales and the UK

Fuelled by English arrogance, one upset EDL supporter established a Facebook page — titled ‘soul crew the shame of Wales and the UK’ — dedicated to shitting on the Soul Crew: “today cardiff city, soul crew turnt [sic] on their own people of the UK and all that British people stand for … hang your heads in shame and swim away swim away”. The page was soon abandoned, but not before the author was able to mash the following into his keyboard:

cardiff soul crew made their intentions clear when they stood side by side with the muslim enermy [sic] and attacked their very own people … in my eyes this makes them worse than what we are fighting against and a disgrace to call themselves Welsh let alone British
~ Saturday at 11:21am

please try and invite your freinds [sic] to this group and get it up and running and let the country know how low these cardiff vermin are
~ Saturday at 11:28am

would just like time to thank the growth of this group as it[‘]s less than 2 hours old and 200 plus already. If you were at cardiff today please tell us your thoughts just so people can see this group is not biased
~ Saturday at 2:17pm

The anonymous fascist meathead responsible for publishing the page also provides a soundtrack to his silly: ‘Hang Your Heads In Shame’ by neo-Nazi Oi! band Strikeforce UK. Formed in 2001, the band, like the WDL, is from England (Newcastle). Funnily enough, the band’s album We Don’t Run featured the smash hit ‘Kick Racism Into Football’.

I live in Melbourne, Australia. I like anarchy. I don't like nazis. I enjoy eating pizza and drinking beer. I barrack for the greatest football team on Earth: Collingwood Magpies. The 2021 premiership's a cakewalk for the good old Collingwood.
View all posts by @ndy →
This entry was posted in Anti-fascism, State / Politics, War on Terror and tagged Australian Defence League, Welsh Defence League. Bookmark the permalink.