Last week, the inquest into Tyler Cassidy’s death heard evidence regarding Tyler’s membership of the ‘Southern Cross Soldiers’ (Tyler Cassidy had been kicked out of an Australian pride group, inquest told, AAP, October 21, 2010).

The SCS have been variously described as “an anti-immigration group” (Alison Caldwell, ABC, October 19), a “Right-wing nationalist youth group” (Paul Anderson, Herald Sun, October 22) and an “ultra-nationalist group” (Farah Farouque, The Age, October 22). The status of Tyler’s membership in the group has been somewhat obscure, with contradictory claims being made. For example:

…Aaron McGenniskin told the inquest… Tyler had been left very upset when he was kicked out of the nationalist organisation Southern Cross Soldiers in the months before he died.

But Mr McGenniskin, who has a tattoo of the Southern Cross on his arm, said Tyler was reinstated in the group after there were a lot of complaints.

Mr McGenniskin rejected suggestions the organisation, which he said he left shortly after Tyler died, was a white supremacist group.

“It’s really just a place to meet with people of any race that are proud to be Australian,” he said.

On the other hand, the ‘Southern Cross Soldiers Melbourne Collective’ blogged on August 3, 2009: 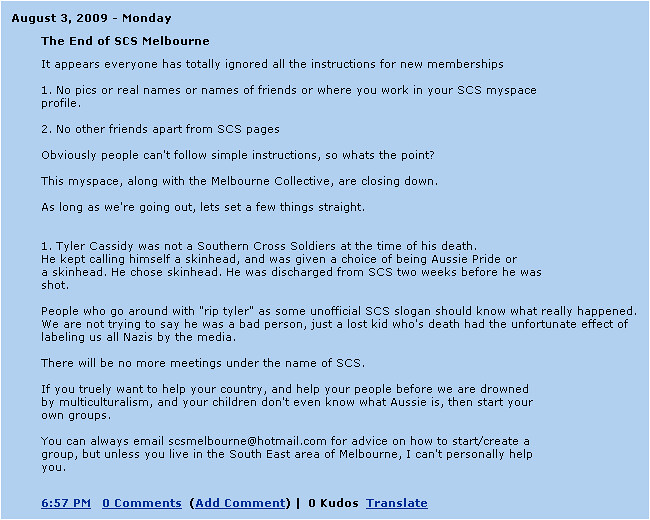 A commentator on a White nationalist discussion forum (belonging to the Australian Protectionist Party) and a self-described SCS claims:

Leaving aside the question of whether or not it matters, the problem of whether or not Tyler was a ‘Southern Cross Soldier’ is intimately related to the amorphous nature of the group, its status as an online networking tool for young nationalists, and the broad nature of its appeal to (overwhelmingly but not exclusively White) Aussie yoof.

To produce an accurate account of the network’s evolution would be very difficult. To the best of my knowledge, the first time that the SCS received any media attention was approximately a month before Tyler’s death when, on November 23, Liam Houlihan wrote about police concern over “a Cronulla-style anti-immigrant gang” and their intention to prevent any similar racist monkey-business taking place on Melbourne beaches (Victorian police vow crackdown to stop ‘another Cronulla’, Sunday Herald Sun). According to Houlihan, the police vow followed “boasts by the 200-strong Melbourne chapter of the Southern Cross Soldiers, who admit having criminals and neo-Nazis in their ranks, that they will converge on bayside beaches this summer”. Liam cites ‘Adds’ as his source — he’s since deleted his MySpace page, as have many others.

As for ‘skinheads’, in this context the appropriate term is ‘bonehead’ — the derogatory term popular in punk and skinhead subcultures to describe racists who ape skinhead fashion (a trend which began in England in the late 1970s and early 1980s and was spearheaded by the now dead bonehead Ian Stuart, vocalist for the band Skrewdriver). Roddy Moreno of Welsh skinhead band The Oppressed explains the distinction here.

I live in Melbourne, Australia. I like anarchy. I don't like nazis. I enjoy eating pizza and drinking beer. I barrack for the greatest football team on Earth: Collingwood Magpies. The 2020 premiership's a cakewalk for the good old Collingwood.
View all posts by @ndy →
This entry was posted in !nataS, Death, History, Media, State / Politics and tagged Southern Cross Soldiers, Tyler Cassidy. Bookmark the permalink.