The ah, interesting personalities that populate the local fascist milieu here in the West Island of New Zealand / Aotearoa are rivalled only by those in the North and South: ex-New Zealand National Front Führer Kyle Chapman being one very good example:

Kyle ‘The Pieman’ Chapman quit as New Zealand’s National Front chief citing family reasons, but now he is recruiting members for his own far-Right organisation.

Former National Front leader Kyle Chapman has formed a secret [sic] survivalist militia and is recruiting members of the far-Right organisation for the “eventual takeover of New Zealand”.

Details of Chapman’s Phantom Recon Militia are revealed in policy documents, photos and emails he sent to an anti-racist activist posing as a white nationalist.

…The militia’s manual includes an urban survival plan recommending shelters are secured with snipers, and advises members to always have a back-up plan, “like if the whole city is under water the plan could be to meet in the hills”.

Sun Tzu, eat ya heart out! 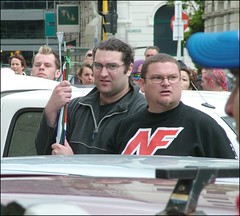 Above : Chapman hears the sound of an impending tidal wave.