I’m not quite sure where to start.

Perhaps at the beginning.

White is the subject of an article in the SF Weekly. To be precise, ‘Local Idiot to Burn the Koran’ by Lauren Smiley (April 22, 2011).

The article details White’s latest publicity stunt for his group, which he calls the ‘Bay Area National Anarchists’, but which is more commonly known as BANANAs.

As the title of Smiley’s article suggests, the stunt consists of Andrew’s burning a copy of the Koran in public — although precisely when and where this act will occur is uncertain at this stage.

As publicity stunts go, it’s not a bad one, and trades on the controversy surrounding mentalist Pastor Terry Jones’ attempt to organise a similar burning outside a mosque in Dearborn, Michigan. (At this stage, it appears that the Pastor’s protest may be aborted: Pastor Is Jailed in Michigan Over Planned March at Mosque, AP, April 22, 2011.) Politically speaking, the stunt’s utility is questionable. Otherwise:

Yeoman’s protests have been falling flat as of late. While last May, he got beat up by some anarchists, his Machete protest ended up just being him and a couple of supporters handing out pamphlets in Livermore with cardboard machetes.

On an even more bizarre note, White (aka Yeoman) has split with his former leader, Troy Southgate. Or rather, Southgate has denounced White for, inter alia, being censorious, dictatorial and of having had “a relationship with an anorexic Jewish girl he picked up from a website called Craigslist and … telling everyone that they were having sex without a condom. Yeoman is also said to be psychologically unstable and is in possession of a large number of firearms.”

Southgate also claims that White has recently been investigated by the US Secret Service for “making a juvenile online threat” against President O’Bama. Further, Southgate writes that White “turned up at the American Renaissance conference around the same time and then declined to testify against anti-fascists at his recent assault trial”. 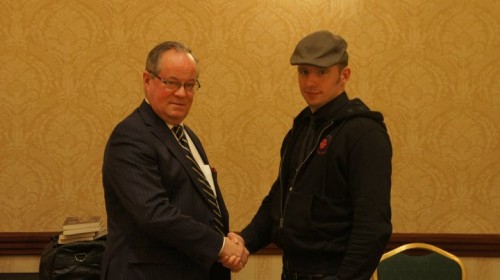 Southgate suggests that White’s recent behaviour may be explained by way of his having been “bought off” by authorities. (Note that the accusation of being a state asset has been levelled at Southgate in the past.) The accusation is a serious one, and indicates the poisonous nature of the once respectful relationship between student and teacher.

What does all of this mean for the ‘national anarchists’?

In Australia, the national anarchists are represented by two men: Welf Herfurth in Sydney and Nicholas Cole in Perth.

Herfurth is friends to both White and Southgate, but is also a member of the neo-Nazi skinhead group known as Volksfront, and a close comrade of Dr James Saleam and the Australia First Party. In his capacity as MC, he welcomed White to the Sydney Forum in 2009. It will be interesting to see which way the German neo-Nazi jumps and whether or not he remains loyal to Southgate, the person whom he credits for converting him to ‘national anarchism’.

As for Cole, he was once associated with the ‘Australian Protectionist Party’, and for this reason was outed by the blog ‘Whitelaw Towers’ (Jim Perren and Peter Campbell). Cole is also attempting to establish a network of fascist University students (but without much luck). An extremely marginal figure, it’s likely that Cole will stick with White.

And as for me, polling suggests that 30% of the population believe I work for The Great Old Ones. I say “Ph’nglui mglw’nafh Cthulhu R’lyeh wgah’nagl fhtagn”.

[Hat tip to Those Who Know and You Know Who.]

I live in Melbourne, Australia. I like anarchy. I don't like nazis. I enjoy eating pizza and drinking beer. I barrack for the greatest football team on Earth: Collingwood Magpies. The 2021 premiership's a cakewalk for the good old Collingwood.
View all posts by @ndy →
This entry was posted in !nataS, Anti-fascism and tagged Andrew White, Andrew Yeoman, BANA, BANANA, Bay Area National Anarchists, national anarchism, Nicholas Cole, Troy Southgate, Welf Herfurth. Bookmark the permalink.