Where In The World Is Osama Bin Laden? Dead… ALLEGEDLY.

Barack Obama claims Osama Bin Laden has been “brought to justice”: that is, assassinated by US soldiers:

Today, at my direction, the United States launched a targeted operation against [a] compound in Abbottabad, Pakistan. A small team of Americans carried out the operation with extraordinary courage and capability. No Americans were harmed. They took care to avoid civilian casualties. After a firefight, they killed Osama bin Laden and took custody of his body.

And may God bless the United States of America. 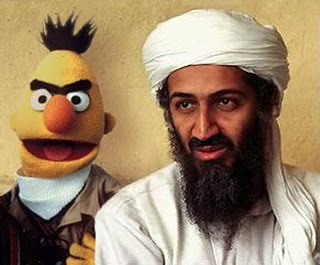 I live in Melbourne, Australia. I like anarchy. I don't like nazis. I enjoy eating pizza and drinking beer. I barrack for the greatest football team on Earth: Collingwood Magpies. The 2021 premiership's a cakewalk for the good old Collingwood.
View all posts by @ndy →
This entry was posted in !nataS, Death, History, State / Politics, War on Terror and tagged Osama Bin Laden. Bookmark the permalink.

3 Responses to Where In The World Is Osama Bin Laden? Dead… ALLEGEDLY.