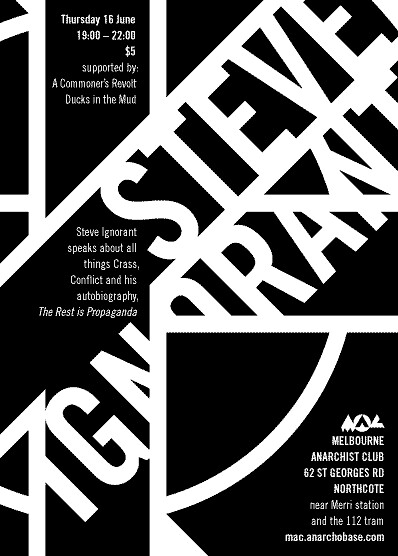 Steve Ignorant speaks about all things Crass, Conflict, his new-found love of the Collingwood Football Club and his new autobiography, The Rest is Propaganda, before taking to the stage at the Tote the following evening. Supported by A Commoner’s Revolt and Ducks in the Mud.

I live in Melbourne, Australia. I like anarchy. I don't like nazis. I enjoy eating pizza and drinking beer. I barrack for the greatest football team on Earth: Collingwood Magpies. The 2021 premiership's a cakewalk for the good old Collingwood.
View all posts by @ndy →
This entry was posted in Anarchism, Art, History, Music and tagged Melbourne Anarchist Club, Steve Ignorant, Steve Ignorant: The Last Supper Tour. Bookmark the permalink.