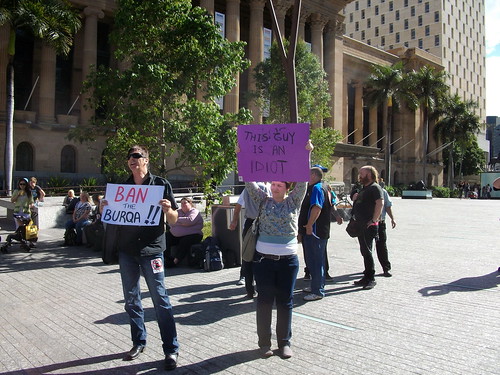 The rally was organised by the ‘Australian Defence League’ (the leader of which, the Englishman Martin Brennan, is currently being held in detention @ Maribyrnong for immigration offences) and some weird new mob called the ‘Australian Patriots Defence Movement’, which claims as its inspiration a string of violent armed robberies by a gang of burqa-clad ladies police have dubbed The Burqa Gang an episode of the Australian version of the US TV show 60 Minutes.

Given these origins you might think the Movement campaigns against tabloid journalism, but no.

Rather, in addition to wanting to stop women from lawfully wearing burqas, the APDM wants: to ensure (redundantly) that food authorities continue to label products as being halal/kosher and that traitors and preachers of sedition are suitably punished; a flat tax; currency reform and; a ‘return’ (sic) to constitutional law.

They also have matching t-shirts.

Curiously, the APDM accuses the Australian Defence League (“2009”) of having attempted to “sabotage” their rally; a further product of the endless bickering among local ‘patriots’.

In any event, perhaps 20 or so individuals attended the APDM/ADL rally, which was met by a larger counter-rally composed of something like 60 or so people unamused by the antics of the ‘Australian Patriots Defence League Movement’.

A fuller account of the rally by a special correspondent:

In the lead-up to the rally, one of the organisers, Wyatt Wharton, stressed that there was to be no racism, no swearing and no threats of violence. It became obvious very early on that he had little or no control; the APDM Facebook page was littered with threats against those who went to counter-protest.

“The Board [!] of APDM clearly states that the [r]ally [p]lanned and organi[s]ed by the APDM to Ban the Burqa will be going ahead with an estimated 300 to 500 people (supporters) attending.

Both of these statements were well wide of the mark. There was no mainstream media in attendance. Presumably they knew the rally was destined to fail.

When I arrived at midday, there was a maximum of 25-30 APDM supporters, and this included some of their partners and children (resplendent in their little ‘Ban the Burqa’ shirts!).

The antifa numbered at least twice this, and their presence seemed to confuse and anger the fascists. I don’t think many of the fascists had ever been to a rally, and they seemed somewhat shocked that the counter-protesters weren’t going to simply sit down and listen. In fact, the antifa out-yelled them to the point that the APDM speaker could not be heard, and once their tiny PA system died, their anger began to rise.

Two of the fascists were dressed in hi-vis work gear, and stood silently, glaring at the crowd. Eventually, they couldn’t suppress their anger any longer and attempted to start a fight with a male protester. As the police intervened, a female protester, having expressed her anger at this attempt to incite violence, was told by one of the hi-vis gentleman “F*ck off you filthy c*nt”.

A short while later, one of them again started on another protester, saying something like “I hope when the Muslims come, they burn down your f*cking house with you and your family in it”. The crowd went wild, and the police yet again intervened.

At this stage, two organisers, Wharton and [?], stepped in and spoke to the pair, and they vanished. I didn’t sight them for the rest of the rally.

Not that it changed the mood.

Another of the organisers, Darren Bailey-Morris, took over the insulting and threatening behavior. He paced up and down in front of the antifa with a book, apparently one written by a Muslim girl that had suffered sexual assault. He’d point at the book, screaming “Pee-dophile, Pee-dophile”! (I don’t know what it is about the right-wing obsession with paedophilia–and their inability to both spell and pronounce it.)

Predictably this became “You are all scum, you support pee-dophiles!” and so on and so on… it became tedious quickly. Australian flags were also being waved/worn by the fascists, and the insults continued to fly.

Bailey-Morris is a vile creature, and everyone got a good look at the type of person he is. While a woman on a megaphone was yelling at him, he put his face up close to it. When she pushed him back with it, he took a dive, but not before raising his fist to her. He then ran straight over to the police and complained. Having witnessed the altercation, they ignored him. Later, while waving The Pee-dophile Book in another woman’s face, he became enraged when she took it from him and threw it over the crowd. I didn’t catch his response, but the look of hatred on his face spoke volumes. In another incident, when a young male protester put a sticker on Bailey-Morris’s back, the crowd laughed, and Bailey-Morris responded by saying “You touch me again and I’ll kill you. I’ll be looking for you mate, I’ll be looking for you”.

After a while, a replacement PA was sourced and the APDM circus started up again. It didn’t last long as the antifa simply became louder, and then we got to see the truly ugly side, the true APDM.

By this stage APDM leaders Wharton and [?] were visibly tired, and seemed defeated. They tried to read prepared scripts, but soon gave up. Bailey-Morris, however, wasn’t going to give up so easily. Having gotten hold of the microphone and decided that he wasn’t going to stick to the ostensible purpose of the rally, he started screeching racist, misogynist and homophobic bile. One young male protester was a particular subject of Bailey-Morris’ (and a few others) vitriol, who called him names (‘Tinkerbell’) and made (limp-wristed) hand gestures at him, leaving little doubt that a bit of gay-bashing was on the agenda. He also commented that most of the women in the antifa crowd were lesbians, and When The Muslims Come, they’ll come for the lesbians first! If it wasn’t so serious, it could be written off as bad, bad comedy…

An older Aboriginal male politely asked BM what the APDM’s stance on indigenous equality was. Although initially ignoring him, Bailey-Morris grew increasingly annoyed as the man in question persisted with his polite request.

And so it began.

“Mate, go buy some socks and then come back and talk”.

Eventually this became “That’s the problem with you lot, always playing on your colour”. Finally, this pearl: “Mate, my best friend is an Aborigine…”

By this stage there were ‘spot-fires’ breaking out in the crowd and the police formed a line between us and the fascists, which remained in place ’til near the end of the rally. At this point, Wharton gave a rambling monologue about something or other that could barely be heard above the din… thankfully. He looked almost relieved when the police wound up the rally an hour early, but it angered some of the others. They started to thrust fingers at the crowd, screaming abuse.

This brought many laughs from his fascist comrades and they all started stating how they too were going to the pub. It was rather sad to watch this small group of misfits, pathetic in defeat, and to realise that the only thing that made them happy was the thought of drowning their sorrows in alcohol.

Someone probably got glassed last night!

I wouldn’t be surprised if this was the end of the APDM. Such a pitiful display of public hatred, receiving so little support, and so strong an opposition, means it’s undoubtedly back to the drawing board. The looks of amazement on the faces of the passing backpackers/foreign tourists said so much. The Ugly Australian in all its ‘glory’…

In any case, as a group the the APDM are certainly nothing even resembling a threat. But on an individual basis, there are some fairly nasty minds involved who will happily scream their venomous bigotry for all the world to see.

Irrational popular tendencies do sometimes call for discretion. But powerful though they may be, they are not irresistible forces. They contain their own contradictions. Clinging to some absolute authority is not necessarily a sign of faith in authority; it may be a desperate attempt to overcome one’s increasing doubts (the convulsive tightening of a slipping grip). People who join gangs or reactionary groups, or who get caught up in religious cults or patriotic hysteria, are also seeking a sense of liberation, connection, purpose, participation, empowerment. As Reich himself showed, fascism gives a particularly vigorous and dramatic expression to these basic aspirations, which is why it often has a deeper appeal than the vacillations, compromises and hypocrisies of liberalism and leftism.

In the long run the only way to defeat reaction is to present more forthright expressions of these aspirations, and more authentic opportunities to fulfill them. When basic issues are forced into the open, irrationalities that flourished under the cover of psychological repression tend to be weakened, like disease germs exposed to sunlight and fresh air. In any case, even if we don’t prevail, there is at least some satisfaction in fighting for what we really believe, rather than being defeated in a posture of hesitancy and hypocrisy.

I live in Melbourne, Australia. I like anarchy. I don't like nazis. I enjoy eating pizza and drinking beer. I barrack for the greatest football team on Earth: Collingwood Magpies. The 2023 premiership's a cakewalk for the good old Collingwood.
View all posts by @ndy →
This entry was posted in !nataS, Anti-fascism, State / Politics, War on Terror and tagged Australian Defence League, Australian Patriots Defence Movement, “...And That’s Why We Should Keep The Bloody Flag The Same!”. Bookmark the permalink.