Established in 2008, White Noise was initially a metal promotion with no explicit political agenda. In December 2009, Gareth Sansom was interviewed for the Metal Obsession site by Taigen Gould (inter alia, the guitarist in local neo-Nazi band Ravenous):

White Noise Productions is a Melbourne-based event management company, run by local musicians, for local musicians with no administrative body taking a hefty cut from events that they run while giving the opportunity for high class management for individual bands and artists, both signed and unsigned within the industry. Now with 16 gigs under its belt and two more within months, White Noise Productions is known for hosting big Australian names of the local scene, such as Embodied, Urgrund, Order or Orias, Vrag, Iciclan and even international Anno Domini Mortus.

In the subsequent period, White Noise (Gareth/Jack Sansom) has openly adopted a neo-Nazi perspective, promoting bands associated with and events organised by the local franchise of the international Blood & Honour network and the bonehead gang the Southern Cross Hammerskins.

You may remember the Southern Cross Hammerskins from such reportage as Victorian neo-Nazi used as medic in Afghanistan (The Age, March 23, 2011):

Kenneth Stewart, 36, has worked as a military-trained paramedic, accompanying aid workers around Afghanistan. His Facebook page shows a swastika flag in his room in Kandahar, and another picture shows him surrounded by Afghans he refers to as ”my nignogs” with a friend adding the comment ”it’s lovely to see a white man back in control of the subhuman”. On Stewart’s Facebook page he regularly makes disparaging comments about Afghans, Aborigines, Jews and others.

Sansom’s other band is Waffenbrüder. It played the Ian Stuart Donaldson memorial gig in October 2011 and is releasing its debut album, This Time The World, in January. In addition to Waffenbrüder, Sansom also distros neo-Nazi agitprop (principally NSBM) via War Doctrine.

Note that the White Noise promotion has undergone several incarnations on MySpace and Facebook: one of the latest appears to have been deleted since Saturday. A screenshot of the page reveals the nature of the promotion and its commitments, including to the notion that there should be six million more Jews murdered… 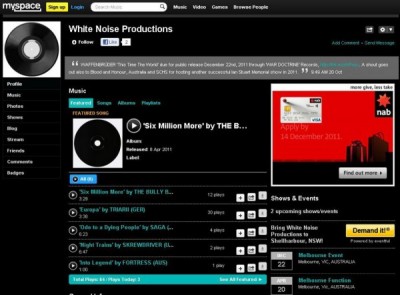 As for White Noise, Stiff Little Fingers done it best:

I live in Melbourne, Australia. I like anarchy. I don't like nazis. I enjoy eating pizza and drinking beer. I barrack for the greatest football team on Earth: Collingwood Magpies. The 2023 premiership's a cakewalk for the good old Collingwood.
View all posts by @ndy →
This entry was posted in Anti-fascism, Collingwood, Music, State / Politics, That's Capitalism! and tagged Blood & Honour Australia, Gareth Sansom, Jack Sansom, Perseverance, The Tote, White Noise, White Noise Productions. Bookmark the permalink.

8 Responses to Nazis @ The Tote. Again.