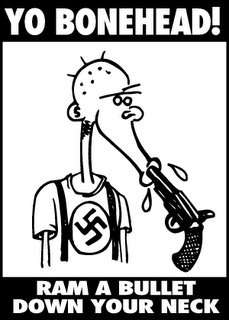 He is a notorious neo-Nazi and axe murderer accused of headbutting a man for asking about his swastika tattoos in a Melbourne hotel.

And yesterday, despite Dane Sweetman’s violent background, the authorities reacted by amending his parole conditions, to ban him from drinking alcohol, sparking anger from anti-racist campaigners.

Sweetman, 36, was released from Fulham prison on parole last October after serving 15 years of a 20-year sentence for the 1990 murder of David Noble at a 1990 party to celebrate Adolf Hitler’s birthday…

Patrons at the Tote Hotel [arguably Melbourne’s home of rock and/or roll] alleged Sweetman headbutted and punched a man in the hotel in the inner-Melbourne suburb of Collingwood earlier this month after the man questioned him about swastika tattoos on his neck. Hotel co-owner Bruce [Eeek!] Milne said the incident was reported to police. “This person has been barred from the hotel,” Mr Milne said…

Sweetman created a sensation at his trial when he pulled a knife from his boot as he was sentenced and plunged it into a wooden dock rail.

He kept a diary in prison in which he boasted of having bashed two Asian men, a Caucasian woman with an Asian boyfriend and a homosexual, although he has a conviction for sexually abusing a boy under 16. His convictions include attempted murder, malicious wounding and assault with a weapon…

Great. A convicted neo-Nazi murderer and child rapist (allegedly) assaults someone in a pub, and the Adult Parole Board extends his parole conditions to include “bann[ing him] from entering the premises of any licensed venue in Collingwood” and “abstain[ing] from consuming alcohol generally”.

1 Response to Mecca-Cola for Sweetman?