According to the SPLC, in the United States “[t]he radical right grew explosively in 2011, the third such dramatic expansion in as many years” (Mark Potok, The ‘Patriot’ Movement Explodes, Intelligence Report, No.145, Spring 2012). In preparing their annual report “the SPLC counted 1,018 hate groups operating in the United States last year, up from 1,002 in 2010. That was the latest in a string of annual increases going all the way back to 2000, when there were 602 hate groups.” As well as Patriots, the haters include Ku Klux Klan, Neo Nazi, White Nationalist, Racist Skinhead, Christian Identity, Neo-Confederate and Black Separatist groups, as well those groups which engage in General Hate. According to Potok, it’s the economy, stoopid:

At the most macro level, the growth of right-wing radicalization — a phenomenon that is plainly evident in Europe as well as the United States — is related directly to political and, especially, economic globalization. As the nation-state has diminished in importance since the end of the Cold War, Western economies have opened up, not only to capital from abroad but also to labor. In concrete terms, that has meant major immigration flows, many of which have drastically altered the demographics of formerly fairly homogenous populations. In Europe and the U.S. both, white-dominated countries have become less so. At the same time, globalization has caused major economic dislocations in the West as certain industries and kinds of production move to less developed countries.

Yeah… kinda sorta. Leaving aside debates about the impact of (economic) globalisation upon the body politic and the operations of the neo-liberal state, how much Haterade have boneheads in the US been drinking?

Last March, David Lynch, leader of the Sacramento, Calif.-based American Front and one of the best-known racist skinheads on the international scene, was shot to death in his Citrus Heights home; his girlfriend was shot in the leg. Within days, police were questioning Charles Gilbert Demar III, a Lynch associate also known as “Charlie Boots” who was the lead singer of the Stormtroop 16 band, as a “person of interest.” Demar was arrested when officials found crystal methamphetamine and a meth manufacturing setup in his apartment, but as of press time he had not been charged in connection with Lynch’s death. Another significant event on the skinhead scene took place last June, when the decade-old Vinlanders Social Club, one of the most violent racist skinhead groups, held its first white power concert. More than 50 people came to the event in Columbus, Ohio, including Richie Meyer, president of the Confederate Hammerskins, and Forrest Fogarty, a musician and one of Meyer’s more prominent followers. Their presence and friendly association with Vinlanders at the event reflected the success of a truce between the two groups that was reached in 2007, ending what had been described as a “blood feud” between them.

• Another American Front luminary is Boyd Rice, inter alia a kamerad of local fascist filmmaker Richard Wolstencroft, recently unable to appear on behalf of the Melbourne Free University (but not a “villain”, apparently);
• If 50 boneheads in the one place at the one time is noteworthy then the Hammered Festival in Brisbane in April should mos def be coming under greater scrutiny;
• The tensions between the Hammerskins and Volksfront in Australia seem to have subsided somewhat, though VF is still forbidden by the Hammerskins from establishing branches outside of VF leader Chris Smith’s hometown of Sydney. 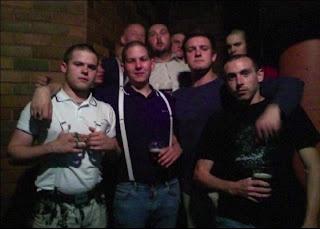 • According to ‘Nazi Skinheads Exposed’ (April 18, 2011), VF supporter Andrew Wilson (front, second from right; Smith is centre front, with braces) is also a supporter of ‘Klub Nation’ (KN), described as being Jason Raftey’s [sic] organisation. KN was the umbrella under and through which local Sydney fascists attempted to stage a hostile take-over of the NSW Humanist Society. According to the blog, KN have spent nearly $20,000 “producing their own Klub Nation currency out of silver coins”. In addition, VF have organised gigs in Sydney with Perth-based Combat 18. Last month, former WA policeman Robert Critchley was sentenced to a minimum nine months jail for providing infos to C18 in Perth (Former WA cop jailed for tipping off neo-Nazi, Aja Styles, February 27, 2012):

A 44-year-old former policeman has been sentenced to serve at least nine months in jail for perverting the course of justice by tipping off a suspected white supremacist at the centre of a police phone tapping operation.

Critchley, 43, who was employed at WA police’s telephone interception unit, made a call from a public telephone to Murray Holmes, a friend of white supremacist Jacob Marshall Hort…

Ironically, the members of C18 responsible for shooting at a Perth mosque all escaped custodial sentences for their anti-Muslim hi-jinks.
• Among those who count themselves among VF’s supporters in Australia is Welf Herfurth of the Australian franchise of the UK-based New Right. (Herfurth is also MC at the Australia First party’s annual conference The Sydney Forum.) In August last year Herfurth had a collection of his essays, A Life in the Political Wilderness, published by Flavio Gonçalves’ Finis Mundi; Keith Preston is a big fan and interviewed Herfurth recently for an online White nationalist radio network.

Speaking of which, two related items:

In Germany, neo-Nazi fashion label Thor Steinar got into some hot water after one of its shops in Chemnitz decided to open under the name ‘Brevik’, ostensibly in er, ‘tribute’ to the town of that name in Norway but with obvious resonances to another Breivik, the not-insane mass murderer Anders. Controversial ‘Brevik’ Clothing Store Changes Name, Spiegel, March 8, 2012:

The company removed the sign over the store under public pressure. The company that operates the Thor Steinar label, Mediatex, said the store had been named after the Norwegian town of Brevik and that any association with Anders Breivik was disastrous and unintended. The company, which operates 13 stores, primarily in the states that belonged to the former East Germany, said it was sorry for the naming. “We apologize if this reminds anyone of the massacre of last summer,” the company said in a statement. “That was not intended.”

Still, the naming of the store as “Brevik” was widely seen as a far-right provocation, even if the company had opened a store with the same name in Hamburg in 2008. It also seems to have a history of recycling names. The Chemnitz outlet is now to be called “Tønsberg.” The company used the same name for a store in Berlin that it opened several years ago and which has since been shuttered.

Fashion-as-fascist-politics and fascist-politics-as-fashion is further examined in ‘The new faces of far-right extremism’ by Benjamin Cunningham (Prague Post, March 7, 2012). The article refers to right-wing yoof as Facebook Fighters (lol) but otherwise re-hashes Czech antifa observations on the changing cultural mode of the ‘autonomous’ nationalists. Elsewhere in the Republic: “Just days after a hotel was firebombed in a suspected racist attack, experts and activists have warned of neo-Nazi groups turning to ‘terrorist’ campaigns as they become increasingly influenced by far-right movements in other countries” (Neo-Nazis Taking to Terror, Pavol Stracansky, IPS, March 9, 2012).

Over a month ago the neo-fascist American Third Position website was hacked and information obtained from the site published on pirasec.com. Apart from anything else, the hack gained attention for the links it revealed between A3P and US Presidential candidate Ron Paul. Now, however, a comment on my blog states:

Pirasec.com has been removed for violating the host’s Terms Of Use/Service and posting hacked info from american3rdposition.com.

http://www.zone-h.com is in the process of being removed.

And a number of other web locations as well.

Apparently, the legal team at A3P is aggressively pursuing these violations. I read that the FBI and Secret Service were informed of credit card theft from hacked data that was posted online.

Any service provider risks serious legal action for posting hacked data by “Anonymous” or anyone else for that matter. One way to contain “Anonymous” is to restrict any hacked information from being displayed.

Makes sense I guess. But while pirasec.com is down, and the pastebin item removed, there are other places on the Interwebs where the hacked information is available. And I doubt zone-h will die.

The A3P hacking incident followed closely on the heels of the publication of nazi-leaks.net, a site containing similar kinds of data obtained from a range of neo-Nazi websites (some old, some new). That site has been taken down, as have mirror sites http://www.nazi-leaks.info and http://www.p4rtyvan.net. OpBlitzkrieg, however, continues to surgically enhance online fascism. Further, it’s not always necessary to hack to find infos. Recently, One Peoples Project (OPP) has obtained the membership lists of the National Socialist Movement (NSM).

Finally, a few days ago a young man in Chile was attacked and hospitalised for the crime of being gay. The culprits are believed to be local neo-Nazis.

SANTIAGO – The lawyer representing the family of Daniel Zamudio expects that an attempted murder charge can be presented before the North Central District Attorney’s Office in the next few days, as well as the whereabouts of the perpetrators of this brutal attack.

This Thursday, the Metropolitan City Officials and the family of Daniel Zamudio, who was attacked last weekend by an apparent neo-Nazi group, will present charges to be attributed to the crime of attempted murder to those responsible for the unprovoked attack sustained by the hospitalized 24-year-old…