Nobody likes neo-Nazis, especially ones from Illinois. In fact, (neo-)Nazism is one of the most universally reviled ideologies known to humanity. Of course, it wasn’t always. Further, its bad reputation regularly manages to attract a small number of losers for whom (neo-)Nazism serves as a prop for a weak ego, and who imagine — tragically — that recreating Hitler’s organised contempt for human dignity will win them f r i e n d s.

Rather than, say, little more than being told to go and jump off a bridge. 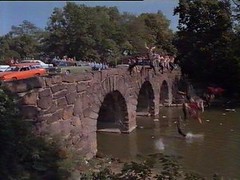 However, over the course of the last 15 years or so — the collapse of the Evil (Communist) Empire in the late 80s and early 90s being a pivotal moment — numerous fascists and racists of one sort or another have been seeking some new way forward to help them achieve their vision of Hell on Earth. Part of this project revolves around crafting a new political identity: for some, at least, parading about in Nazi drag — a la the soon-to-be defunct National Socialist Movement (“Heil Satan!”) — is about as attractive a proposition as the men who don such costumes.

Instead, building upon the partially successful inroads into the working class subculture of skinhead that fascists made in the late 1970s, these other fascist elements have turned to the various forms of nationalist ideology that the collapse of Empire spewed forth, and it’s on this ideological foundation that the fascist doctrine of Third Positionism / ‘National Bolshevism’ (‘neither right nor left’) has been built, one that forms an increasingly important organising principle of the far right. Even the self-contradictory doctrine of ‘National Anarchism’ has its followers, especially among among those with more hair than brains…

OREGON — A Freeport-based Aryan Nation group plans to rally in front of the Ogle County Courthouse on Saturday, in what the organization’s leaders are calling a non-violent, “voice of opinion about current immigration laws.”

Members of the Aryan Anarchist Skins, described as a white nationalist group on the organization’s Web site, will demonstrate at 2 p.m. on Saturday, on South Fifth Street between the old courthouse and the Ogle County Judicial Center, said Lisa Shultz, a “sergeant officer” for the group. Shultz said she expects up to 200 people to attend the rally, though the group itself has just 10 members.

I live in Melbourne, Australia. I like anarchy. I don't like nazis. I enjoy eating pizza and drinking beer. I barrack for the greatest football team on Earth: Collingwood Magpies. The 2021 premiership's a cakewalk for the good old Collingwood.
View all posts by @ndy →
This entry was posted in Anti-fascism, History, State / Politics. Bookmark the permalink.