A jealous lover of human liberty, and deeming it the absolute condition of all that we admire and respect in humanity, I reverse the phrase of Voltaire, and say that, if God really existed, it would be necessary to abolish Him. 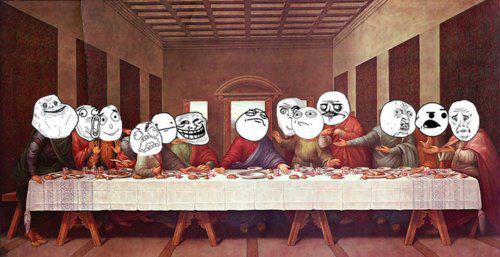 I’m agnostic when it comes to some things, and that includes the utility of blogging about the 2012 Global Atheist Convention. Nonetheless…

I think one of the more interesting aspects of the conference was the attendance of a small group (apparently from Dandenong Mosque) of protesting Muslim men. In and of itself, this incident wasn’t that remarkable. After all, atheism is a damanable crime in the eyes of some religiously-minded folk, whether Muslim or Christian or neither (and Christians too expressed vocal opposition to the Convention). But three things make their shouty noteworthy.

First, the reaction to it — especially the decision by two same-sex couples to kiss in front of the protesters — prompted some disco on my Twitter account. Secondly, the incident raises the question of the political flavour of the GAC, especially in light of Jeff Sparrow’s argument concerning ‘The Weaponization of Atheism’. Finally, the protest, Jeff’s writing (and of course much other commentary) and the content of the GAC itself begs the question of whether or not there are, in fact, any particular political implications associated with or proceeding from atheism, whether ‘New’ or ‘Old’.

So, to begin with, here’s the text of the placards that the protesters waved:

• Al-QURAN The FINAL TESTAMENT ISLAM The Only Monotheistic Religion
• Athiesm [sic] is the CANCER Islam is the ANSWER
• Christopher Hitchens FINAL DESTINATION > HELL FIRE
• Atheism is humiliation of reason ISLAM is the only SOLUTION
• Every creation has a CREATOR
• Atheism is a Mental ILLNESS We are the Son’s of ADAM Not the Son’s of APES
• Message to INFIDEL Ayaan Hirsi Ali BURN IN HELL FOREVER
• Atheism = HELL FIRE Islam = PARADISE
• MOHAMMAD P.B.U.H. the LAST & FINAL Messenger of ALLAH
• THERE IS NO GOD BUT ALLAH

Among the few chants I was able to hear and understand were ‘Allahu Akbar!’ (‘God is great!’) and ‘Christopher Hitchens, burn in Hell!’

Now, on the one hand, I’m not rationally convinced that God exists, let alone is great and so big, so absolutely huge, so strong and, well, just so super, that He requires constant reminders of same; on the other hand, I doubt even if he were still alive, Hitchens would mind being condemned in this fashion.

So, in response to Twitter critic Benjamin Solah’s observation that “Muslims are hardly the people to target” and that a protest outside of the GAC may be considered appropriate “given the Islamophobes and pro-war, pro-torture figure-heads inside”, I think it would be more accurate to observe that: a) on this occasion, it was a small group of Muslim men who had elected to target a gathering of atheists, and; b) their reasoning, rather than animated by a concern for ending state violence or promoting, say, the UN Convention Against Torture, was entirely religious, condemnatory and triumphalist.

Be that as it may, The Four Horsemen Three Horsemen (and One Horsewoman) who spoke at the Convention do express the opinion that while Islam, like other religions, is fundamentally flawed, the nature of its doctrines pose particularly serious problems for liberal society/Truth, Justice, and the American Way. This analysis is contained in numerous equine productions; the filmed discussion between Richard Dawkins, Daniel Dennett, Sam Harris and Christopher Hitchens in September 2007, later released as The Four Horsemen, is a case in point.

Gathered together at the New York apartment of the Drink-Soaked Ex-Trotskyite Popinjay For War, at one stage in the discussion, Daniel Dennett asks his fellow riders what they consider to be their priorities in terms of combating irrational belief. He then suggests that they look at Islam. “Is there any remote chance of a reformed, reasonable Islam?”, he asks. Dawkins reacts by expressing some confusion over Wahabbism and its relationship to Islam; Harris states that the religion is in fundamental opposition to modernism, while Hitchens points out that there have been Islamic regimes, in the past, which have been relatively liberal. He then adds that, like all religions, there is a totalitarian impulse in Islam, one which is compounded by the fact that it claims, unlike Christianity and Judaism, that it is — as the sign carried by one of the Muslim counter-protesters read — THE FINAL TESTAMENT. And an end to inquiry is an end to freedom.

For Jeff Sparrow, this concentration upon Islam — and the policy recommendations which would seem to flow from it — is deeply objectionable. Thus “Today, we can identify an atheism that’s not so much militant as weaponised – that is, deployed, all too often, in the service of the extreme Right… [in] arguments for war and state repression, tricked out as scepticism”. As Jeff notes, these arguments were often deployed with great relish by Hitchens, as in the case of this tribute (Adam Shatz, ‘The Left and 9/11’, The Nation, September 5, 2002) to the use in Afghanistan of cluster bombs by the US armed forces:

Further: “Cluster bombs are perhaps not good in themselves, but when they are dropped on identifiable concentrations of Taliban troops, they do have a heartening effect” (‘It’s a good time for war’, The Boston Globe, September 9, 2002). Jeff also draws attention to another of Hitchens’ speeches of November 2004, of which Mike Ludders (Columnist Hitchens lectures on political dissent, The Kenyon Collegian, November 18, 2004) wrote:

Hitchens unequivocally endorsed the recent siege of Fallujah, saying at the podium “the death toll is not nearly high enough … too many [jihadists] have escaped.” He continued on this path for some time, later saying that his “hatred” of fundamentalists, whom he characterized as being the majority of anti-U.S./U.K. forces in Iraq, is “much more pure, much more rational, and much more enduring” than their hatred for him or the West. Hitchens elaborated that this was because “[the jihadist’s] hate is irrational, it’s at all of life. He wants to destroy his own and others[.]” Hitchens contrasted this with his sentiment to love his own life and respect those of others, which he said “will more surely see me through” than the rage of the enemy.

Jeff also points out that such attitudes are shared by two other mounted scholars: Sam Harris and Ali Ayaan Hirsi:

Sam Harris… thinks that atheists have a special insight into the war on terror, which should, he says, [be] understood as a conflict against ‘a pestilential theology and a longing for paradise’. Most liberals, he continues, fail to understand ‘how dangerous and depraved our enemies in the Muslim world are’. Indeed, ‘the people who speak most sensibly about the threat that Islam poses to Europe are actually fascists.’

‘We are at war with Islam,’ she says bluntly. ‘And there’s no middle ground in wars.’ ‘All Muslim schools. Close them down. Yeah, that sounds absolutist. I think 10 years ago things were different, but now the jihadi genie is out of the bottle.’

In seeking an explanation for the emergence of this New, ‘weaponised’ atheism, Jeff argues that “a comparison with the past is instructive”. By way of illustration, in the late nineteenth century, things in Melbourne — the location of the 2012 Global Atheist Convention — were very different. At that time, he relates, Christianity dominated public life, and atheism was a minority doctrine adherence to which entailed real risk of persecution; like Islam today, atheism was “organizationally and socially a fringe sect, proselytizing ideas that the mainstream found foreign and threatening”. But atheists also cultivated allies among the poor and, having disassociated itself from the liberal, elitist vision of men like Symes, became more strongly linked to the labour movement, anarchism and socialism: “In a few decades time, the Russian revolution cemented an association between atheism and social reform, to the extent that, for many reactionaries, ‘godless’ and ‘commie’ became almost synonymous”.

In essence, then, where atheism once formed part of a broader radical arsenal, it is now an elite pursuit, and reflects the interests of those who usually propagate it: an educated, white, male population, not only content with secular authority but seeking its extension and amplification on a global scale. By force, if necessary, but (of course) only in self-defence, and always at the behest of locals (especially women).

In terms of political prescription, then, The New Atheists would appear to depend upon a belief in the work of social scientists such as Samuel Huntington. Unlike a good natural scientist, however, his theses regarding The Clash of Civilizations™ are seldom put to the test by these scienticians, and the means by which (religious) ideology is given expression left largely unexamined. That is, whereas these members of the atheist calvary are happy to denounce religious belief as stoopid, and the behaviour of religious folk stoopid to the same degree:

The traditional Left approach to belief begins with a recognition that religion is not simply a set of ideas. Religion is a cultural identity; it’s also simultaneously an aesthetic, a system of feeling, a guide to social and sexual conduct, an organizational framework and many other things besides. These different functions contradict and complement each other in all sorts of ways.

That’s why the same holy texts can, in different social settings, give rise to entirely different behaviours and attitudes; it’s why both the Anabaptists and Pat Robertson can claim inspiration from the New Testament.

And so on and so forth. Further: “Even put as schematically as that, the argument suggests a particular political response. Atheists and others seeking to fostering secularism in the Arab world might do so by, first and foremost, ending the military interventions that have brought so much suffering.” As Chomsky puts it:

The U.S. has always supported the most extreme fundamentalist Islamic movements and still does. The oldest and most valued ally of the U.S. in the Arab world is Saudi Arabia, which is also the most extremist fundamentalist state. By comparison, Iran looks like a free democratic society – but Saudi Arabia was doing its job. The enemy for most of this period has been secular nationalism. U.S.-Israeli relations, for example, really firmed up in 1967 when Israel performed a real service for the U.S. and Saudi Arabia. Namely, it smashed the main center of secular nationalism, (Gamal Abdul) Nasser’s Egypt, which was considered a threat and more or less at war with Saudi Arabia at the time. It was threatening to use the huge resources of the region for the benefit of the population of the countries of the region, and not to fill the pockets of some rich tyrant while vast profits flowed to Western corporations.

I live in Melbourne, Australia. I like anarchy. I don't like nazis. I enjoy eating pizza and drinking beer. I barrack for the greatest football team on Earth: Collingwood Magpies. The 2021 premiership's a cakewalk for the good old Collingwood.
View all posts by @ndy →
This entry was posted in !nataS, History, State / Politics, That's Capitalism!, War on Terror and tagged #atheistcon, 2012 Global Atheist Convention. Bookmark the permalink.