Strangling the life out of fascism : Spain, 1936 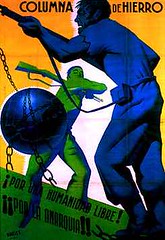 ‘Strangle the life out of fascism’

The Iron Column defended its actions against the campaign of vilification mounted by the Spanish Communist Party and the Republican government in the following manifesto aimed at showing that its militants were not given to rhetoric and meant business:

“. . . As anarchists, we who – under the familiar denomination ‘Iron Column’ – struggle against the clerical and militarist reaction on the Teruel Front are concerned, of course, with the problems of the front, but also with those of the rearguard. Consequently when we realised that in Valencia things were not moving in the direction that we wished, when we noted that the rearguard, far from being a reassurance to us, was a focus of concern and misgivings, we resolved to intervene and, to that end, we dispatched the following requests to the relevant organisations:

(1) that the Civil Guard be disarmed and disbanded;
(2) that all of the armed forces of the state in the rearguard (Assault Guards, Carabineros, Seguridad, etc.) be sent immediately to the front and;
(3) that all records and archives held in capitalist and state institutions be destroyed forthwith.”

These requests had their foundations in revolutionary and ideological considerations. As anarchists and as revolutionaries, we considered the existence of the Civil Guard to be a threat; it is a reactionary corps that has, throughout its life and more especially during the present revolt, clearly displayed its mentality and its intentions. The Civil Guard was odious in our eyes for many reasons and we had no confidence in it. So we asked that it might be disarmed and proceeded to disarm it.

We asked that all of the armed corps be moved up to the front lines because men and weapons are in short supply there, while in the city, under the present state of affairs, their presence was more of a provocation than a necessity. We have been halfway successful on this count and we shall press on until our objective has been completely achieved.

Finally we asked for the destruction of all the documents that represented a whole past era of tyranny and oppression against which our free consciences had revolted. Let us destroy the records and give consideration to requisitioning those buildings that, like the court buildings, have been used in other times to entomb revolutionaries in prisons and have no raison d’être today, now that we find ourselves at the dawning of a libertarian society.

Such objectives brought us into Valencia and this explains all that we did in the manner deemed most appropriate.

Later, during our stay in Valencia, we observed that whereas efforts to acquire weapons foundered due to our lack of funds, there was a huge quantity of gold and other precious metals in many places – this prompted us to requisition the gold, silver and platinum of some jewellers in insignificant quantities which were surrendered to the Organisation. The above is what we have done. Now let us examine what we did not do.

We are accused of looting buildings. This is a lie. We defy anyone to present us with an account of this and to show that our men were not acting out of necessity but from mere caprice and a desire to create confusion. We stand accused of murdering people for amusement. This is a foul calumny. What have we done to deserve this reputation? What crimes have we committed? A deplorable episode, which we are first to lament and to condemn, appears to be the prosecution evidence. We had nothing to do with the death of our socialist comrade José Pardo Aracil. It was shown, on the very night of his death, that no member of our column had any hand in it. It has never occurred to us to attack the socialists nor any other antifascist group, much less to do so in the treacherous fashion in which Pardo was attacked. This does not mean that we renege on our aims, for these are the sole motivations for our fight: we realise, however, that at the present moment, internecine warfare would be a crime. We are facing a formidable enemy and all our exertions must be bent to his destruction. In these crucial times for Spain’s future, our position is clear and unmistakable. We shall fight with all our manpower, all our energies, all our enthusiasm in order to confound the vileness of fascism forever. We struggle to make a reality of the social revolution. Let us march towards Anarchy. Consequently, here and now, we shall stand by everything that makes it possible to live with greater freedom, to smash the yokes that oppress us and to destroy the vestiges of the past.

To every worker, every revolutionary, every anarchist, let us say: struggle, wherever you may be – at the front line or in the rearguard, against all the enemies of your liberty. Strangle the life out of fascism. But see to it also that as a result of your efforts no dictatorial regime is installed, no continuation (with all the vices and defects) of that state of affairs that we are striving to eradicate. With weapons now and with working tools later on, learn to live without tyrants, learn to emancipate yourselves, for this is the only path to freedom. Such, clearly expounded, is the thinking of the ‘Iron Column’.

I live in Melbourne, Australia. I like anarchy. I don't like nazis. I enjoy eating pizza and drinking beer. I barrack for the greatest football team on Earth: Collingwood Magpies. The 2021 premiership's a cakewalk for the good old Collingwood.
View all posts by @ndy →
This entry was posted in Anarchism, Anti-fascism, History. Bookmark the permalink.