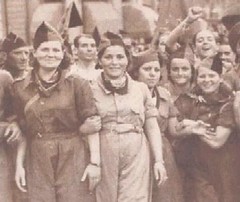 Barcelona, 1936
from Homage to Catalonia, by George Orwell.

The Anarchists were still in virtual control of Catalonia and the revolution was still in full swing. To anyone who had been there since the beginning it probably seemed even in December or January that the revolutionary period was ending; but when one came straight from England the aspect of Barcelona was something startling and overwhelming.

It was the first time that I had ever been in a town where the working class was in the saddle. Practically every building of any size had been seized by the workers and was draped with red flags or with the red and black flag of the Anarchists; every wall was scrawled with the hammer and sickle and with the initials of the revolutionary parties; almost every church had been gutted and its images burnt. Churches here and there were being systematically demolished by gangs of workmen.

Every shop and cafe had an inscription saying that it had been collectivised; even the bootblacks had been collectivized and their boxes painted red and black. Waiters and shop-walkers looked you in the face and treated you as an equal. Servile and even ceremonial forms of speech had temporarily disappeared. Nobody said ‘Senor’ or ‘Don’ or even ‘Usted’; everyone called everyone else ‘Comrade’ or ‘Thou’, and said ‘Salud!’ instead of ‘Buenos dias’.

Tipping had been forbidden by law since the time of Primo de Rivera; almost my first experience was receiving a lecture from a hotel manager for trying to tip a lift-boy. There were no private motor-cars, they had all been commandeered, and the trams and taxis and much of the other transport were painted red and black. The revolutionary posters were everywhere, flaming from the walls in clean reds and blues that made the few remaining advertisements look like daubs of mud. Down the Ramblas, the wide central artery of the town where crowds of people streamed constantly to and fro, the loud-speakers were bellowing revolutionary songs all day and far into the night.

And it was the aspect of the crowds that was the queerest thing of all. In outward appearance it was a town in which the wealthy classes had practically ceased to exist. Except for a small number of women and foreigners there were no ‘well-dressed’ people at all. Practically everyone wore rough working-class clothes, or blue overalls or some variant of militia uniform.

All this was queer and moving. There was much in this that I did not understand, in some ways I did not not even like it, but I recognized it immediately as a state of affairs worth fighting for. Also, I believed that things were as they appeared, that this was really a workers’ State and that the entire bourgeoisie had either fled, been killed or voluntarily come over to the workers’ side; I did not realise that great numbers of well-to-do bourgeois were simply lying low and disguising themselves as proletarians for the time being.

I live in Melbourne, Australia. I like anarchy. I don't like nazis. I enjoy eating pizza and drinking beer. I barrack for the greatest football team on Earth: Collingwood Magpies. The 2021 premiership's a cakewalk for the good old Collingwood.
View all posts by @ndy →
This entry was posted in Anarchism, Anti-fascism, History. Bookmark the permalink.