Members of the ‘Australian Education Union’ (AEU) are going on a 24-hour strike tomorrow (Thursday, June 9) and taking an excursion to the city. The strike’s been triggered by the failure of the Victorian state government (boo! hiss!) to agree to a 30% wage increase for teachers, instead offering a mere 2.5% increase (yadda yadda yadda) — despite (gasp!) the Premiers’ apparent promise to make Victorian teachers ‘the best paid in the country’ (yadda yadda yadda) at the previous state election (a promise broken in March 2011).

Note that the premier’s decision proves that he does indeed stand for something.

The AEU — which is affiliated to the ALP — hasn’t been on strike in Victoria for some years, but in the last few it did manage to funnel many hundreds of thousands of dollars to the now-collapsed private recruitment agency WorkPartners. Fingers xed, the huge numbers of teachers recruited by WP will help to swell the masses of those who rally at Rod Laver Arena at 9.30am and Parliament at noon. In any case, the strike has been given overwhelming support by members: of the 28,605 employees declared eligible to vote by Fair Work Australia (FWA), almost 17,000 did so, of whom just under 16,000 voted ‘yes’ to taking “protected industrial action” in support of reaching an agreement with the government. Students at Melbourne Grammar won’t be affected by the action, however, so I’m not convinced the premier will be unduly worried by the Marxist rabble briefly taking to the streets. 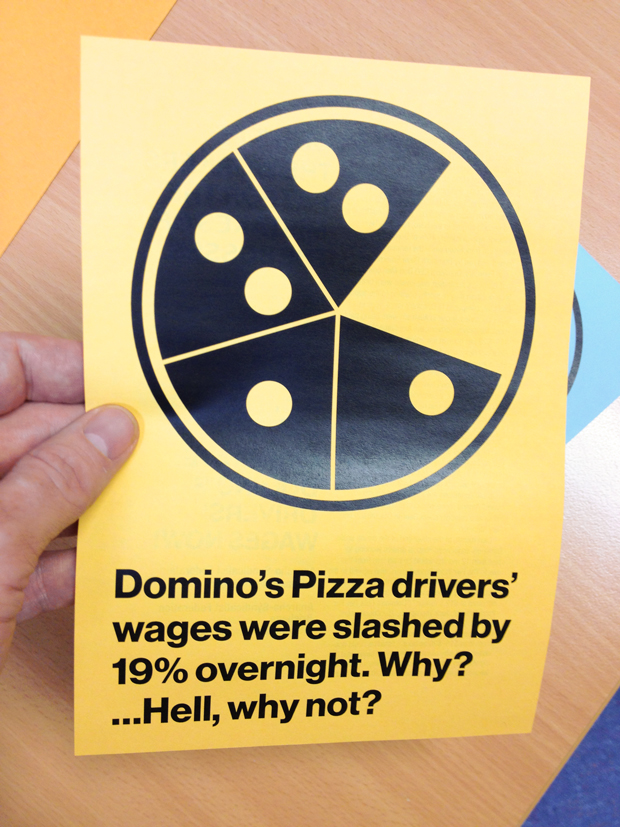 On Saturday, June 11, supporters of Domino’s Pizza drivers will be picketing the Domino’s outlet @ 555 Flinders Street in the city from 7pm. The picket is in support of driver’s attempts to have their wages re-instated after the company slashed them by 19% earlier in the year. Why? Seemingly, on the basis that workers in other countries get paid less for performing the same task: a case study in the rhetoric (if not the reality) of what’s sometimes termed the global race to the bottom.

That, and because they could.

Word on the virtual street is that a date may soon be set for a hearing into the case at FWA; Domino’s management have asked FWA for a six-month extension. Domino’s drivers are represented in an agreement with the company by Australia’s biggest, bestest and (arguably) least competent union, the ‘Shop Distributive and Allied Employees’ Association’ (SDA). The Shoppies have been fighting tooth-and-nail for the interests of Domino’s drivers since 2001, when the workers were delivered holus bolus to the SDA from its rivals in the ‘Transport Workers’ Union’. In other words, the agreement has (apparently) not been re-negotiated since 2003/4, and the SDA was forced into applying for a termination of the agreement only a few weeks ago… What happens next will be interesting to see.

For more infos, see : Domino’s Pizza drivers’ wages were slashed by 19% overnight. Why? Hell, why not? (May 4, 2012). Otherwise, in May a proposal for a Brisbane Workers’ Assembly was made and a conference is being held on Ngunnawal country in Canberra at the Australian National University between July 13-15, 2012 titled EduFactory!, consisting “of three days of radical self-education, criticism and organisation intended to bring together students who seek a way out of the present crisis in university education”.

I live in Melbourne, Australia. I like anarchy. I don't like nazis. I enjoy eating pizza and drinking beer. I barrack for the greatest football team on Earth: Collingwood Magpies. The 2021 premiership's a cakewalk for the good old Collingwood.
View all posts by @ndy →
This entry was posted in State / Politics, Student movement, That's Capitalism! and tagged Australian Education Union, Domino's Pizza, WorkPartners. Bookmark the permalink.