Domino’s Pizza drivers’ wages were slashed by 19% overnight. Why? Hell, why not?

Domino’s Pizza, Inc. is an international pizza delivery corporation headquartered in Ann Arbor, Michigan, United States. Founded in 1960, Domino’s is the second-largest pizza chain in the United States and has over 9,000 corporate and franchised stores in 60 70 countries and all 50 U.S. states. Domino’s is the largest pizza chain in the 52nd US state, Australia (and second largest in the 53rd, Aotearoa/New Zealand). Approximately 70% of Domino’s Australian stores are franchised while the remaining 30% are owned and run by Domino’s Pizza Enterprises.

In February, Domino’s CEO Don Meij complained that Domino’s Australian employees were being paid far more than they’re worth, pointing to the apparent fact that, compared to Domino’s employees in other countries, those in Australia were being paid most: for delivery drivers, the extravagant sum of $15-$20 per hour. In the article in the Australian Financial Review by Murray Cranston in which Don elaborates his views, Murray quotes Restaurant and Caterers Assocation [sic] director Greg Parkes. “Other countries don’t have the same sort of system with penalty rates, weekends and public holidays,” Mr Parkes said. He said he planned to make a submission and application to Fair Work Australia asking for the award system and penalty rates to be reconsidered.

The opening shots in the current war on worker’s pay and conditions in the food retail industry were fired back in January when some impoverished restaurant owners claimed “high wages and inflexible conditions are forcing businesses to close”. Among those who complained were millionaire celebrity chefs George Calombaris and Gary Mehigan.

Last month, at the other end of the dining scale, Domino’s announced “casual drivers working for less than 12 months would be paid less from this week. The Fair Work Ombudsman, who agreed to the cuts, declined to comment after criticism Domino’s was targeting workers while boasting of a half-year net profit of $12.6 million” (Domino’s cuts pay for pizza drivers, Tuck Thompson, The Courier-Mail, April 12, 2012). SDA boss Joe de Bruyn — whom I suspect, like other union bosses, earns slightly more than $15–$20 an hour — “said he could not understand why casual drivers were being paid significantly less than in-store Domino’s workers, whose casual adult pay rate was $20.86 an hour”.

While Joe ponders the intricacies of the labour marketplace (not to mention the grave threat posed to Judeo-Christian civilization by ghey marriage and other symptoms of Godless, self-centred paganism), some workers in Brisbane have decided that action speaks louder than words, and launched a campaign to protest the lowering of wages.

Casual labour is being attacked by those in power as it is seen as a weak target for cutbacks. The ASF Brisbane are currently starting an ongoing campaign to reinstate the wages of our comrades and raise awareness over the issues of casualisation of labour, and calling on other groups and individuals to join us in solidarity with our members and with the thousands of drivers around Australia that have been affected. 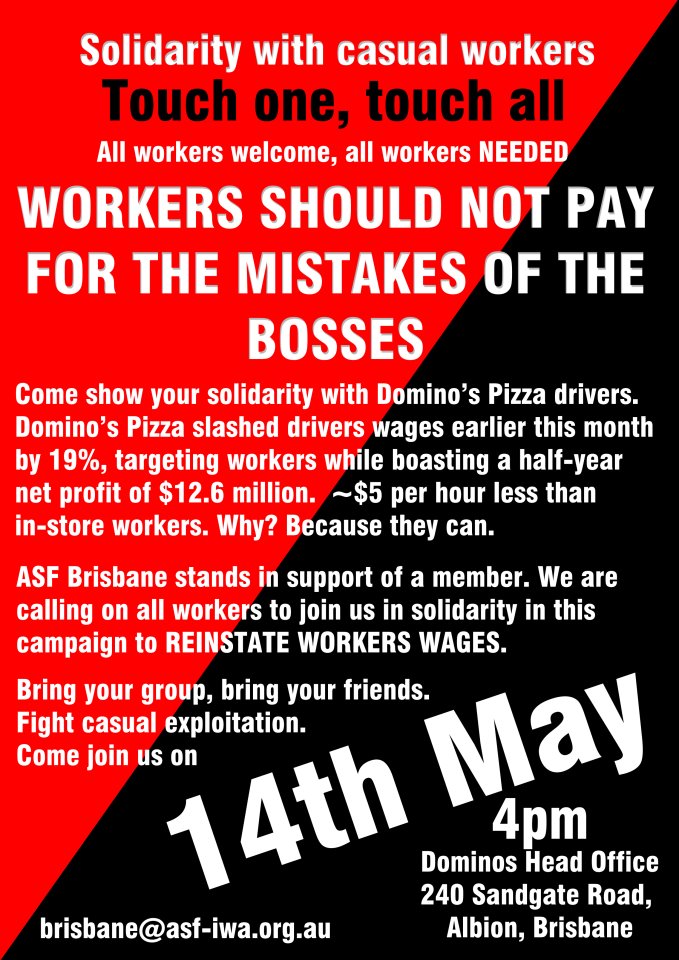 I live in Melbourne, Australia. I like anarchy. I don't like nazis. I enjoy eating pizza and drinking beer. I barrack for the greatest football team on Earth: Collingwood Magpies. The 2021 premiership's a cakewalk for the good old Collingwood.
View all posts by @ndy →
This entry was posted in That's Capitalism! and tagged Anarcho-Syndicalist Federation (Brisbane), Domino's Pizza. Bookmark the permalink.

6 Responses to Domino’s Pizza drivers’ wages were slashed by 19% overnight. Why? Hell, why not?