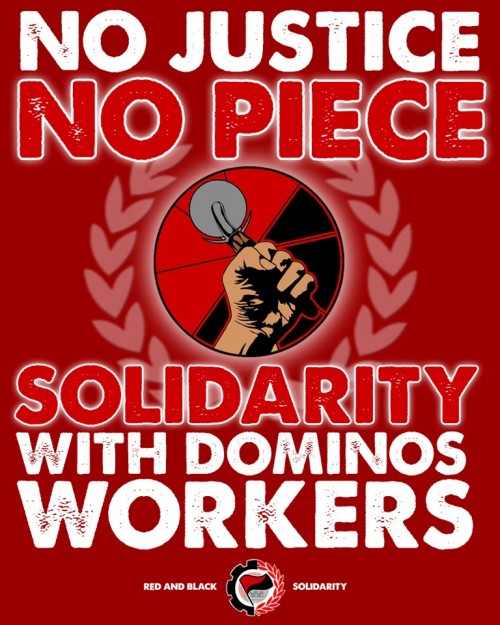 On September 15 a Global Day of Action in Solidarity with Australian Domino’s Pizza Workers has been organised by the General Transport Workers’ Association (GTWA), affiliated to the Anarcho-Syndicalist Federation (ASF).

In April, Domino’s Pizza delivery drivers in Australia had their wages slashed by 19% overnight by Domino’s Pizza Enterprises (DPE), the local franchise of a global, US-based pizza chain.* In July, DPE was ranked sixth among Queensland-based businesses, its market capitalisation estimated to be $289 million, an increase of 69.7% on the previous year.

The pizza delivery drivers are nominally represented by the Shop, Distributive and Allied Employee’s Union (SDA), a yellow union which is also Australia’s largest and functions as a sinecure for a small clique of right-wing Labor Party officials.

In their most recent negotiations with Domino’s, the SDA agreed to adjourn proceedings, thus ensuring workers’ wages and conditions remain at the standards set in the 2001 agreement brokered between the union and the company (PDF). The SDA had the option of terminating this agreement — and thereby allowing workers to receive the national minimum wage — but instead elected to allow it to remain in place indefinitely.

The SDA: as useful as a one-legged man in an arse-kicking contest.

Solidarity actions will be taking place in Australia, England, Poland, the United States and elsewhere. For information, see the GTWA website.

For more background information on the dispute see Domino’s Pizza drivers’ wages were slashed by 19% overnight. Why? Hell, why not? (May 4, 2012) | Anarchists Deliver Fair Pizza, Conal Thwaite, newmatilda.com, June 15, 2012.

I live in Melbourne, Australia. I like anarchy. I don't like nazis. I enjoy eating pizza and drinking beer. I barrack for the greatest football team on Earth: Collingwood Magpies. The 2021 premiership's a cakewalk for the good old Collingwood.
View all posts by @ndy →
This entry was posted in State / Politics, That's Capitalism! and tagged Anarcho-Syndicalist Federation (Brisbane), Domino's Pizza, General Transport Workers' Association, SDA, Shop Distributive and Allied Employees' Association. Bookmark the permalink.