A federal judge has ordered a freelance journalist to surrender video footage of a July 2005 clash between San Francisco police and anarchist demonstrators or face jail for contempt of court.

The journalist, Josh Wolf, said Monday he would refuse to turn over the tapes, even if U.S. District Judge William Alsup rejects his legal defense at a hearing Thursday.

“I am prepared to go to jail,” said Wolf, 24. He said that his tapes don’t show the event federal prosecutors say they are investigating — the alleged vandalism of a police car — and that yielding the videos would turn him into “a surveillance camera for the government.” 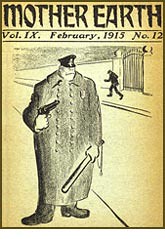 Following 9:11, the US Federal Government decided to take the opportunity to clamp down harder on political dissent, the radical environmental movement — labelled ‘terrorist’ by the FBI — being a primary target. One of the chief legal mechanisms through which the FBI is attempting to destroy the movement is — as in the case of Josh Wolf — the Grand Jury, and one of those facing persecution for his beliefs is Daniel McGowan. The family and friends of Daniel have recently added a faq to their site; among other things, this faq explains the practice of the Grand Jury in this way:

What is a Grand Jury?

The primary function of the modern grand jury is to review the evidence presented by the prosecutor and determine whether there is probable cause to return an indictment. The original purpose of the grand jury was to act as a buffer between the king (and his prosecutors) and the citizens, but many feel the grand jury rubber stamps indictments. The grand jury does not even hear conflicting evidence and it is left to the good faith of the prosecutor to present any conflicting evidence. Since the 1950s, the power of federal grand juries has grown enormously. Federal courts have authorized ever-expanding investigative power. Because the evidence is in control of the prosecutor, and witnesses cannot bring their lawyers into the grand jury, critics have noted that we have only the good faith of the government prosecutor to rely upon.

Unlike potential jurors in regular trials, grand jurors are not screened at all for any biases or other improper factors. Grand juries are secret proceedings and the prosecutor, grand jurors, and the grand jury stenographer are prohibited from disclosing what happened before the grand jury. Secrecy was originally designed to protect the grand jurors from improper pressures.

Judge Sol Wechsler, the former Chief Judge of New York State, was quoted as saying, “A grand jury would indict a ham sandwich.”

Daniel was indicted by a federal grand jury in Oregon on his charges. For more information on grand juries, see here.

For more on the US Government’s Green Scare, please see the links to your right under ‘War on Dissent’.

I live in Melbourne, Australia. I like anarchy. I don't like nazis. I enjoy eating pizza and drinking beer. I barrack for the greatest football team on Earth: Collingwood Magpies. The 2023 premiership's a cakewalk for the good old Collingwood.
View all posts by @ndy →
This entry was posted in Anarchism, Media, War on Terror. Bookmark the permalink.