Many Young Liberals are racist, sexist, homophobic nerds. And proud. Who knew?

Collingwood has now lost three matches in a row!

“COLLINGWOOD fell from the top four yesterday and faces falling out of the finals altogether after its fourth loss in five games, with coach Michael Malthouse admitting the team deserved to be in its predicament…”

In other news, the entrenched racist, sexist and homophobic attitudes of leading members of the Young Tories have been exposed. Again. This time on Lateline; prompted, perhaps, by the release of video footage of the antics of some young, rather illiberal students at last year’s NUS conference, shot by independent filmmakers Vanessa Hughes and Jessica Tyrrell (a previous example of their work is available here). 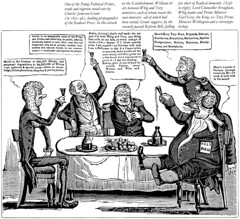 In a pre-emptive strike launched early last week, worried Tory Party officials lodged an official complaint with their ABC, alleging “threatening behaviour” and “unethical journalism” on the part of Lateline reporter John Stewart… or possibly Janine Cohen, Four Corners reporter and author of the “The Right Stuff”: “a case study into a political party struggling with democracy”.

But like… whatever. I see no reason to panic. In all fairness to the Tories, there’s little doubt in my mind that the complaint is justified. In informing the Party that they will be exposing racist elements within it, journalists violate the sacred duty of the press: barracking for HoWARd. And declaring one’s intention to do otherwise does indeed threaten vested interests…

Still, if there’s anything worse than the Young Tories it’s Young Labor:

MARK Latham, Labor leader manque, and once the scourge of private schooling, has endorsed a book on backroom politics written by former Cranbrook pupil John Hyde Page, a Young Liberal turned law student, to be published next week. “John Hyde Page has made a very important statement about the corrosive impact of machine politics on young people in this country.

The Young Liberals are horrendous and, if anything, Young Labor is worse,” Latham says. How does Page feel about the recommendation? “The politics he depicted in his book, The Latham Diaries, are those with which I became familiar, so I very much value his endorsement.” Page hopes the old truism that books about the Liberal Party don’t sell is turned on its head, and that The Education of a Young Liberal entertains with its account of the inside machinations of a political party.

I live in Melbourne, Australia. I like anarchy. I don't like nazis. I enjoy eating pizza and drinking beer. I barrack for the greatest football team on Earth: Collingwood Magpies. The 2023 premiership's a cakewalk for the good old Collingwood.
View all posts by @ndy →
This entry was posted in Collingwood, State / Politics, Student movement. Bookmark the permalink.

10 Responses to Many Young Liberals are racist, sexist, homophobic nerds. And proud. Who knew?