Labor students at Monash University have declared WAR! on the Wholefoods restaurant — and by most accounts they appear to be winning.

For those of you coming in late, “Wholefoods is a non-profit, collective-run, vegetarian restaurant, café and grocery, situated in the campus centre at Monash University in Clayton.”

While (almost) maintaining its commitment to the provision of fruits, legumes and vegetables to the student body, over the last few years Labor students — presumably in preparation for their future roles in the state and corporate bureaucracy — have been doing an excellent job of sabotaging Wholefoods as a collective effort, imposing one-man management, higher prices, and destroying the collective’s volunteer base. Most recently, the Labor-dominated Executive of the Monash Student Association decided to trash the furniture at Wholefoods, reportedly spending $10,000 on tables and chairs to replace the icky old ones with others considered less likely to give a yuppie a splinter (in the unlikely event one should accidentally wander in and sit down).*

In response to their attempted sabotage, a belated campaign in defence of Wholefoods has been launched.

Anger at the MSA’s incompetence has reached boiling point etc, and a few weeks ago the restaurant was (almost) smashed to pieces by a (very small) horde of vandals, necessitating its temporary closure.

Last week Wholefoods was vandalised [see img below] and Wholefoods staff received anonymous abusive phone calls. Due to these developments the MSA has had no choice but to close Wholefoods while the matter is being investigated by Monash University security and the Victorian police. These actions are a disgraceful attack on student services and student money, and are incredibly disappointing to everyone at the MSA. We apologise for any inconvenience caused by this temporary closure. 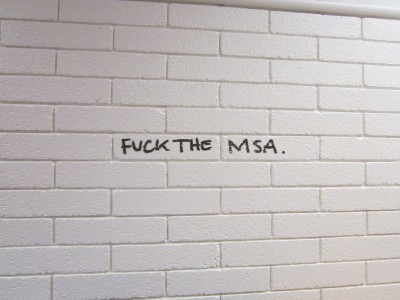 *Supposedly, the tables were “made in the late ’70s from recycled timbers from the Otways forests, off-cuts from logging operations collected by Wholefoods Collective members who were part of the successful campaign to turn the Otways into a National Park“.

I live in Melbourne, Australia. I like anarchy. I don't like nazis. I enjoy eating pizza and drinking beer. I barrack for the greatest football team on Earth: Collingwood Magpies. The 2021 premiership's a cakewalk for the good old Collingwood.
View all posts by @ndy →
This entry was posted in State / Politics, Student movement, That's Capitalism! and tagged Monash Student Association, Wholefoods. Bookmark the permalink.

1 Response to Monash ALP ~versus~ Wholefoods