Victory for Chávez. (And Diosdado Cabello.) 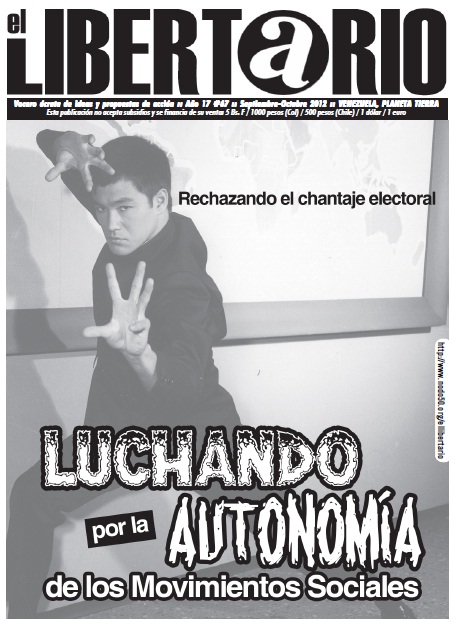 Yeah so Uncle Hugo has won in Venezuela. As he put it: Gracias a mi amado Pueblo!!! Viva Venezuela!!!! Viva Bolívar!!!!! Some anarchists in Venezuela reckon it ain’t so great.

A vote for Chavez is a vote for Diosdado Cabello [1]; a vote for Capriles is a vote for Diosdado Cabello. The truth of this sentence is verified when we compare the main parts of the programs offered by both candidates: the direction the energy industry will take. Energy is the undisputed element in the country’s developmental model since 1914 when the first oil well was dug in Venezuela. The false polarization stands naked when one notes the consensus in doubling the production of fossil fuels with the participation of transnational companies. For anarchists, however, the fundamental discussion is not about who controls the industry, whether the national or the foreign bourgeoisie, but whether this reiteration of the extraction model goes against the promotion of an alternative developmental model that would not feed the internal combustion engines of global capitalism and would not damage the environment or the indigenous and peasant communities. Whoever wins on October 7 will represent a victory for financial speculative capitalism, in tune with a world market that has faithful servants in people such as Diosdado Cabello.

A Hugo Chavez victory will only be possible thanks to a convenient opposition candidate, a representative of Venezuelan oligarchy who took part in the coup d’état of April 2002. By giving Chavez a perfect scenario for revitalizing polarization, Capriles proposes a discourse focused on the middle class and deaf tone to the popular sectors. Despite his pretense of a wide and inclusive program, it was never a secret the campaign decisions were taken by the top of the most conservative and reactionary party in the country: Primero Justicia [Justice First]. Despite the obvious unhappiness with the results of his tenure and the sustained increase in social conflicts, kept in check by the caudillo’s charismatic expectations, in this scenario Capriles did not convince the unhappy Chavistas or wide sectors of the population. With this result the future would be dominated by a strengthening of the authoritarian communal state, increased exclusion from public policy due to party reasons and the domino effect of an October victory resulting in Bolivarian hegemony over governorships and mayoralties in the following regional elections in December.

On the other hand, a Capriles victory would be possible only because of abstention on the part of unhappy Chavistas and a punishment vote by large segments of the voters and not because of the winner’s virtues. Tired of the humiliation, demagogy and the general impoverishment of the standard of living, a vote against Chavez by those who had previously put their faith in him would yield the numbers needed for a second electoral defeat of the Commander-President. This would open up a scenario of conflict and the ratification of the governorships held by the so-called “opposition” in the next round of elections. This result would strengthen the formation of a new bipartisanism among the Chavista and non-Chavista blocks, who would agree on alternating tenure and so tacitly becoming a new “Pact of PuntoFijo”. [2]

Whatever the result there are two more important consequences. The first is the justification of representative comprador democracy that appeared falling in the popular explosion of the “Caracazo” [3], a form of government that could only be fixed by a charismatic and populist figure such as Hugo Chavez. The second, of special interest to anti-authoritarians, is that these elections take place in the midst of the worst roll back in history of the autonomy of the Venezuelan social movements. As shown by the numbers from the Observatorio Venezolano de Conflictividad Social [Venezuela’s Observatory of Social Conflict] [4], turning popular initiative into electoral matter yielded what seemed most difficult: to stop the increase in the number of demonstrations staged in the country, which had been on the rise since 2004. The electoral blackmail institutionalized towards electoral channels the energy of the masses in motion, dissipating the autonomy enjoyed by some grass roots conflicts against the established powers.

The attitude consistent with Anarchism can be no other than the denunciation of the electoral farce and blackmail, refusal to participate in the comedy and channeling all our energies towards recuperating and fixing the autonomy of popular social movements. The facts of the last 13 and half years confirm it: Governmental discourse changes nothing. Structural and revolutionary changes come from each and every one of the oppressed and their collective initiatives.

Notes:
[1] Diosdado Cabello is the main representative of the “Bolibourgeoisie” which arouse during the Chavez government.

I live in Melbourne, Australia. I like anarchy. I don't like nazis. I enjoy eating pizza and drinking beer. I barrack for the greatest football team on Earth: Collingwood Magpies. The 2021 premiership's a cakewalk for the good old Collingwood.
View all posts by @ndy →
This entry was posted in Anarchism, History, State / Politics, That's Capitalism! and tagged El Libertario, Hugo Chávez, Venezuela. Bookmark the permalink.

8 Responses to Victory for Chávez. (And Diosdado Cabello.)