‘First they came for the anarchists…’ : Solidemo @ US Consulate, Melbourne, Friday, November 16

Update (November 16) : Between 50–70 people (slightly more than I expected) attended the rally on Friday, which began around 3 and finished after 5. Some people spoke and some people played music. A man from the Australian Federal Police took everybody’s photograph and many people signed cards for Matt and KteeO. More later.

In the Pacific Northwest of the United States three anarchists — Katherine ‘KteeO’ Olejnik, Leah Plante and Matt Duran — have been brought before a Grand Jury. The trio have refused to testify and been imprisoned as a result, Matt from September 13 and Kteeo from September 27 (Leah, who was imprisoned on October 11, was released last week). Their incarceration will likely continue until the Grand Jury dissolves (perhaps another 18 months).

When FBI and Joint Terrorism Task Force agents raided multiple activist homes in the Northwest last week [July 25], they were in search of “anti-government or anarchist literature.”

The raids were part of a multi-state operation that targeted activists in Portland, Olympia, and Seattle. At least three people were served subpoenas to appear before a federal grand jury on August 2nd in Seattle.

The week of November–12 November 19 will see solidarity actions with the Grand Jury Resisters in the US and elsewhere. In Melbourne, a rally [Facebook] has been organised to take place on Friday (Friday) November 16 outside the US Consulate (Level 6, 553 St Kilda Road, Melbourne) at 3pm. Supporters are asked to wear black and to bring their favourite ‘anti-government or anarchist literature’. 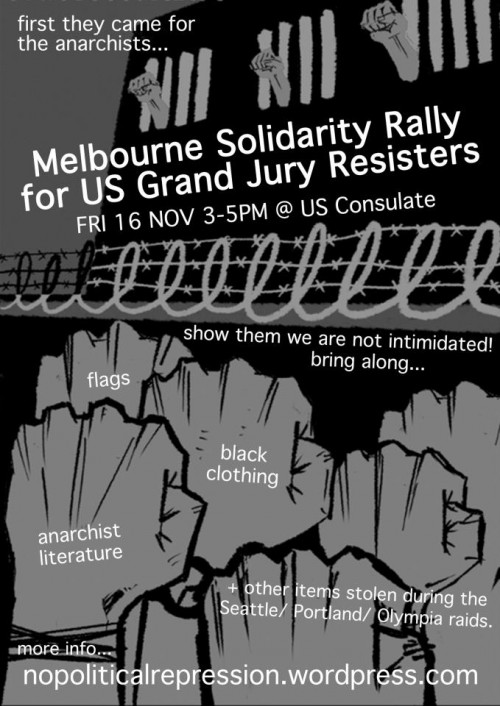 I live in Melbourne, Australia. I like anarchy. I don't like nazis. I enjoy eating pizza and drinking beer. I barrack for the greatest football team on Earth: Collingwood Magpies. The 2023 premiership's a cakewalk for the good old Collingwood.
View all posts by @ndy →
This entry was posted in Anarchism, State / Politics, War on Terror and tagged FBI, Katherine 'KteeO' Olejnik, Leah Plante, Matt Duran. Bookmark the permalink.

16 Responses to ‘First they came for the anarchists…’ : Solidemo @ US Consulate, Melbourne, Friday, November 16