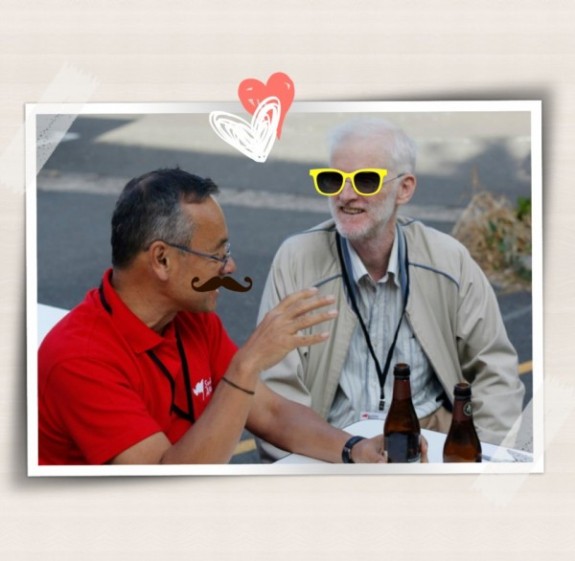 Yes that’s right: the leader of the God Delusional Opportunists (aka Socialist Alternative) and the leader of the Parliamentary Cretinists (also known as Socialist Alliance) are here seen conspiring to prevent the International Communist League from realising their dream: building an internationalist revolutionary workers party modelled on the Bolshevik party of Lenin and Trotsky, which led the working class to power in the 1917 Russian Revolution. Nationalist views are widely imbibed by the Laborite reformist left in this country, including the Communist Party of Australia (CPA) — which also sent a delegation to SA’s ninth annual conference in Geelong (January 18–20).

Speaking of the ICL, the latest issue of Australasian Spartacist makes reference to Louise O’Shea’s controversial attack upon the Jill Meagher mobilisation. Thus:

… the anti-communist Socialist Alternative have cause a a stir amongst the reformist left [with O’Shea’s article] … Seeking to distance SAlt from bourgeois feminism but lacking the necessary Marxist program to do so, O’Shea’s article is peppered with rhetoric against class collaboration. This takes some chutzpah given that SAlt is immersed in class-collaborationist politics, from entrenching itself in cross-class anti-war coalitions to calling for a vote to the capitalist Greens in numerous parliamentary elections.

Meanwhile, Trotskyist Platform (“Splitters!”) has made the latest issue of its journal (#15) available online here. And hey! Kids! “Massively Increase Public Housing! Socialistic China is Doing That So Let’s Fight for the Same Here!” (Or so the Fawning Conciliator of the Social-Imperialist Left would have us believe.)

As for the “leadership of the world socialist movement”, it rightly denounces the AWL, SA and SAlt in its coverage of ‘The Australian pseudo-left and the NSW public sector union’ (Peter Symonds, wsws.org, January 19, 2013).

Further afield, SAlt’s British great-uncle, the Socialist Workers Party (SWP), is currently in a state of ‘crisis’ (according to some), as they seek to address allegations of rape by a central committee member. The process instituted by the party to deal with these allegations has been the subject of much criticism, as has been the party leadership’s response to critics. A handful of prominent SWP members (China Miéville, Richard Seymour) have complained loudly and publicly about the affair and their discovery that the SWP may be moar ‘centralism’ than it is democratic. Unlike a handful of other dissenters, these two intellectuals can haz too much social status to simply be told to fuck off by the party leadership. They may even be in a position to mount some kinda challenge to the incumbents — who knows? The Weekly Worker, that’s who. (FWIW, my money’s on the son of John Alexander Callinicos and Hon. Ædgyth Bertha Milburg Mary Antonia Frances Lyon-Dalberg-Acton remaining on top; some SWP sympathisers have recently signed an open letter declaring that they’re not. happy. with the party leadership and will henceforth no longer be accepting invitations to be published by or speak on party platforms.)

In other news, the (IMT) socialist fightback in the North and South Islands has suffered a setback with the appropriation of the Marxist Voice of Labour and Youth by a so-called “anarchist” group. Seriously. Note that fightback.org.au — originally the property of a Sydney wEirD0 and Cronulla fan, then the Marxist Voice of Labour and Youth Down Under — is now under the sinister control of the Socialist Party (SP). Incidentally, the SP’s views on left unity malarkey may be found here.

I live in Melbourne, Australia. I like anarchy. I don't like nazis. I enjoy eating pizza and drinking beer. I barrack for the greatest football team on Earth: Collingwood Magpies. The 2021 premiership's a cakewalk for the good old Collingwood.
View all posts by @ndy →
This entry was posted in Trot Guide and tagged Not brotsky or crotsky or drotsky or frotsky. But Trotsky., Trot Guide. Bookmark the permalink.