Update (February 19) : The venue for Wilders’ trouble-making in Melbourne on Tuesday, February 19 is La Mirage Reception & Convention Centre, 210 Hume Highway, Somerton. The venue can be contacted on (03) 9305 4855. A picket is being held at the venue from 6pm.

Update ( February 8 ) : Wilders’ tour appears almost certain to attract protest and it also seems that the venue originally booked by the Q Society in Sydney has cancelled its booking. Note that one of Wilders’ most recent project is an initiative intended to stop the construction of any further churches synagogues supermarkets mosques in the Netherlands.

Not that he’s got anything against Muslims: it’s teh Muslamics what done it.

Update : Fairfax has an article on Wilders’ tour titled ‘White supremacists ready for fight’ (Natalie O’Brien, The Age, February 2, 2012). It refers, inter alia, to the ‘Australian New Nation’ website — established several years ago in order to replace the White Pride Coalition of Australia site — and the Internet radio show ‘Australia Calling’. ‘Australia Calling’ is produced by Brisbane nazi Carl D Thompson, who briefly came to public attention some years ago when, after publishing some anti-Semitic material, he lost his job editing the One Nation newspaper. 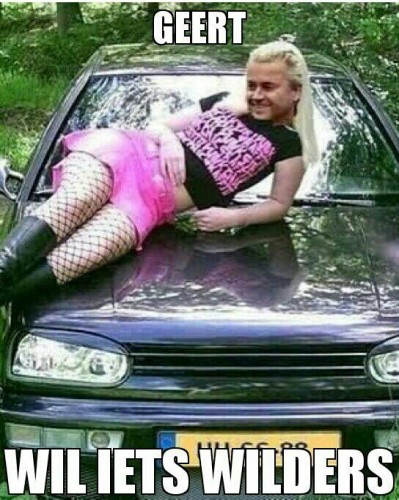 Muslim-hating Dutch rightist Geert Wilders is gonna be touring Down Under in a few weeks. The Flying Dutchman’s tour is being organised by an anti-Islamic group known as the Q Society, and Wilders is scheduled to speak in Melbourne on the 19th, Perth on the 20th and Sydney on the 22nd of February, with the venues only being announced a day or two prior.* Unsurprisingly, having already roused controversy, Wilder’s tour is expected to generate some opposition, but also a good deal of support, especially among the far-right fringe. To that end, a number of individuals drawn from racist and fascist groups will be attending Wilder’s events :– some ostensibly in order to protect them from disruption.

Within 48 hours of declaring that it was the sacred duty of White racialists to attend Wilder’s event in Sydney — largely in order to show the dastardly Reds who’s boss — Welf Herfurth — the leader of the minuscule forces of the New Right (NR) in Australia — changed his mind, and declared it to be a positively dreadful idea, one which risked aligning the NR with Zionists (ergo Jews).

Actually, the former NPD, ON and Democrats (!) member was admonished by his master, Troy Southgate, to pull his head in and think a li’l moar about the implications of aligning his handful of followers with The Jew. Thus: 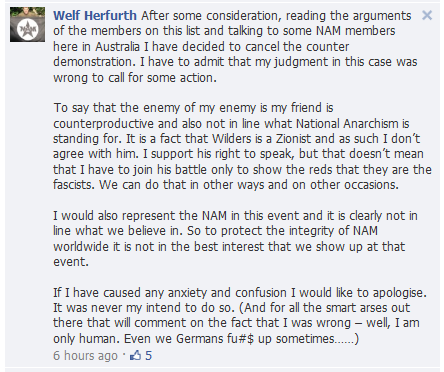 Note that Herfurth’s mob last reared its head in Sydney back in November, when police provided them a platform at a Palestine solidarity rally; Herfurth himself is a Holocaust denialist and strong supporter of his kamerad Uncle Fred Toben.

Of course, support for Wilder’s message also extends deep into the conservative heartland, and includes prominent Muslim-baiters in the Tory party as well as handsomely-paid hacks in the corporate and state media. Further, the conservative embrace/promotion of paranoid fears over Muslamics has stolen a good deal of oxygen from a number of racist, right-wing fringe-dwellers, including Anders Breivik’s friends in the Australian Protectionist Party (APP). Just five short years after its foundation as a more ‘moderate’, less anti-Semitic version of the Australia First Party (AF), the APP has undergone its first major crisis, with the entirety of its Sydney branch decamping in order to establish yet another marginal bunch of kooks, this time modelled on Wilder’s Freedom Party (the APP modelled itself on the BNP). Whether or not the handful who spat the dummy can actually assemble another party remains to be seen, but given that they were the only active members the APP possessed the Protectionists seem doomed to disappear back into oblivion.

Andrew Phillips, APP National Chairman, has relocated himself and his PO Box to Tasmania, while the party continues to nominate two others as contacts for NSW and VIC. Having lost perennial losers Darrin Hodges and Nicholas Hunter-Folkes, Phillips is now begging someone — anyone — to nominate themselves to undergo the humiliation of losing another popularity contest. Those interested can write to P.O. Box 170, Dover, Tasmania 7117 (which also functions as the postal address of Meals On Wheels in that part of the world).

*According to Q, “Details will be advised to paid-up patrons 48 hours prior to event. Expect a function centre within easy reach of the CBD. Photo ID is required to enter; only one small handbag per patron permitted into the venue.” Paul Sheehan writes for the defence here and you can read more about the Q Society on their webshite.

Overseas: Stephen Yaxley-Lennon (aka ‘Tommy Robinson’ aka ‘Paul Harris’), the leader of the E E EDL, has been sentenced to 10 months jail for ‘possession of a false identity document with improper intention’, viz entering the US to attend an anti-Muslim gathering using a false passport. (Tommy’s troubles mirror those of Martin Brennan, another whinging Pom and the former leader of the A A ADL, forcibly expelled from Australia in August 2011 for immigration offences.) Also in attendance at the gathering in New York in September last year was Yanqui crackpot Robert Spencer. Spencer is described as ‘VP Islamic Scripture and History’ for the Q Society and runs a loon website called jihadwatch; the Coordinator for Victoria/Tasmania and Secretary of the Society is Ralf Schumann; Andrew McDonald is their Administrator in NSW while in Perth Debbie Robinson Coordinates teh stoopid. Anyway, here’s a picture of the patriotic sheila from Perf (Debbie Robinson) and two foreign loons (Pamela Geller and Robert Spencer) holding the Strayan flag at SION: 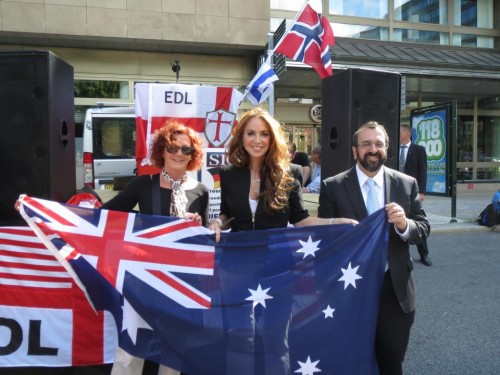