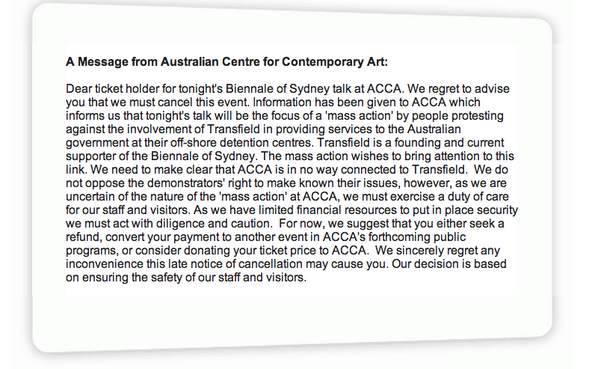 [Update (February 24) : ACCA cancelled the address by the Biennale director promoting the event citing security concerns (Melbourne arts event halted over fears of mass protest over involvement of Transfield Services, ABC). About 50 or so people rocked up anyways and had a yarn about the Biennale. My prediction? Things are gonna get worse …]

Stage a creative protest outside ACCA during their talk promoting the 19th Biennale of Sydney, in order to draw attention to Transfield’s sponsorship of the event. Please share ideas regarding peaceful, creative actions that can be undertaken outside the venue.

The Australian Centre for Contemporary Art is located at 11 Sturt Street, Southbank, Melbourne.