From the Department of #FUCKYEAHANDREWBOLT:

When is Andrew Bolt gonna write about the communist-inspired subversion of @biennalesydney that's what I wanna know. #19BOS 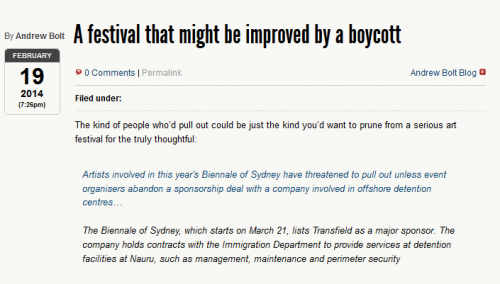 As a result, I have now become a WINNER!

Whoever predicted Andrew Bolt as the first comment from the Murdoch thinkers wins http://t.co/ZXD2bFT3sC

• Reportedly, six more artists — Sara van der Heide, Henna-Riikka Halonen, Ane Hjort Guttu, Hadley+Maxwell, Shannon Te Ao and Yael Bartana — have signed on to the Open letter from artists to the Board of Directors of the Biennale of Sydney, bringing the total number of engaged artists to 34 (over 1/3 of all artists exhibiting). The Board is meeting tonight to discuss the letter and to formulate a more formal response to the boycott than the following jerk of the knee:

RE: comments on BOS sponsors: BOS brings attn 2 the ideas & issues of our times – objectors only deny the legitimate voice of BOS artists

• In other news, ARTINFOAustralia ‏– the same mob that first responded to the boycott by tweeting that “The Biennale is an incredible event and a great asset to Sydney and Australia. End of story.” — has now published an article on the subject (Artists Protest Over Biennale of Sydney’s Links with Detention Centres, Nicholas Forrest, February 19, 2014), while the story has also been written about by Fairfax (The ethical minefield of arts sponsorship, Fiona Gruber, February 19, 2014) and Murdoch (Artists demand Biennale of Sydney severs ties with company linked to asylum seeker detention centres, Elizabeth Fortescue, February 19, 2014).

• An online petition has been launched while Facebook is blocking links to a discussion on boycott tactics on the xborderoperationalmatters blog.

• I’m unaware of the precise level of financial support Transfield provides for #19BOS but an article in the Financial Times (Wealth of talents, Cristina Ruiz, September 7, 2012) states that “[t]he execution and installation of [a] work, one of hundreds in five venues across the city as part of the 18th edition of the Sydney Biennale, were paid for by a private foundation set up by local philanthropists Luca Belgiorno-Nettis and his wife Anita, just two of the many wealthy individuals who have contributed to the costs of the exhibition. This private support, which accounts for 21 per cent of the Sydney Biennale’s A$10.7m ($11m) budget, has given the curators the freedom to choose artists whose work may be difficult to sell.”

• Finally, Helen Razer has composed a slightly daft piece titled Sydney Biennale: artists divide over dirty money (February 20, 2014). And while there’s probably little point in engaging with it — more productive discussions on strategy + tactics are taking place elsewhere — it may be worth making a few notes. First, rendering political positions suspect through invoking the notion of ‘purity’ is a familiar one to anarchists; secondly, abstracting the call for a boycott from its location within a broader critique of the regime of mandatory detention tends to render invisible the wider struggle from within which the campaign emerged (and for which it forms one of many parts).