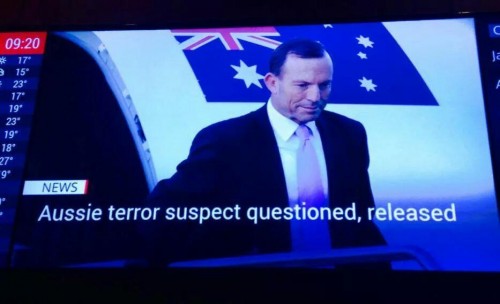 The Australian government has announced it will be transporting arms to Kurdish groups fighting IS/IS in Iraq:

This is quite remarkable given that one of these groups, the Kurdistan Workers’ Party (PKK), is proscribed under Australian law as a terrorist organisation. Given that the US government is similarly committed to supplying arms, and given that Australian foreign policy is typically in lockstep with the US, the status of the PKK may well change … a fact which, if nothing else, reveals the highly pragmatic nature of The War on Terror™. Chomsky:

The fact of the matter is that there is no War on Terror. It’s a minor consideration. So invading Iraq and taking control of the world’s energy resources was way more important than the threat of terror. And the same with other things. Take, say, nuclear terror. The American intelligence systems estimate that the likelihood of a “dirty bomb,” a dirty nuclear bomb attack in the United States in the next ten years, is about 50 percent. Well, that’s pretty high. Are they doing anything about it? Yeah. They’re increasing the threat, by increasing nuclear proliferation, by compelling potential adversaries to take very dangerous measures to try to counter rising American threats.

This is even sometimes discussed. You can find it in the strategic analysis literature. Take, say, the invasion of Iraq again. We’re told that they didn’t find weapons of mass destruction. Well, that’s not exactly correct. They did find weapons of mass destruction, namely, the ones that had been sent to Saddam by the United States, Britain, and others through the 1980s. A lot of them were still there. They were under control of U.N. inspectors and were being dismantled. But many were still there. When the U.S. invaded, the inspectors were kicked out, and Rumsfeld and Cheney didn’t tell their troops to guard the sites. So the sites were left unguarded, and they were systematically looted. The U.N. inspectors did continue their work by satellite and they identified over 100 sites that were systematically looted, like, not somebody going in and stealing something, but carefully, systematically looted.

See also : PKK – from terrorist threat to ally?, Deutsche Welle, August 31, 2014: “The Kurdistan Workers Party (PKK) is banned in Germany. The EU deems it a terrorist group. Now, however, regarding the threat from ‘IS,’ some German politicians appear ready to begin discussions over reconsidering.” | The possibility of breaking up Iraq, Kurdish Anarchists Forum, anarchistan, August 28, 2014 | Chomsky On The Prospect of Kurdish Independence: Noam Chomsky interviewed by Namo Abdulla, Rudaw, February 15, 2011 | Australian Federal Police (AFP) ~versus~ Kurdistan Workers’ Party (PKK), August 20, 2010.

I live in Melbourne, Australia. I like anarchy. I don't like nazis. I enjoy eating pizza and drinking beer. I barrack for the greatest football team on Earth: Collingwood Magpies. The 2020 premiership's a cakewalk for the good old Collingwood.
View all posts by @ndy →
This entry was posted in !nataS, History, State / Politics, That's Capitalism!, War on Terror and tagged Kurdistan Workers' Party. Bookmark the permalink.