Huh: it never rains, it pours.

As noted, real estate guy Iggy Gavrilidis is Chief Swinging Dick for GD Down Under. You may remember Iggy from such stunning victories as the joint GD/Australia First Party rally in Brisbane in May (where the handful of fascists who assembled had to flee in a maxi taxi driven by an Indian gentleman LOL). See : So who were these nazis anyway? Australia First & Golden Dawn in Brisbane (May 4, 2014).

In any event, assuming the dynamic duo pass the character test — ie, the Australian government elects to allow elected fascists into the country — and assuming also that GD intend to publicise their meetings, there’s a fair to good chance that their presence in Australia will not go unopposed. For more information on fun in Melbourne see The Disrupt & Dismantle Golden Dawn Welcome Collective event page. No doubt further infos will be available if/when the two old fascists make it in. 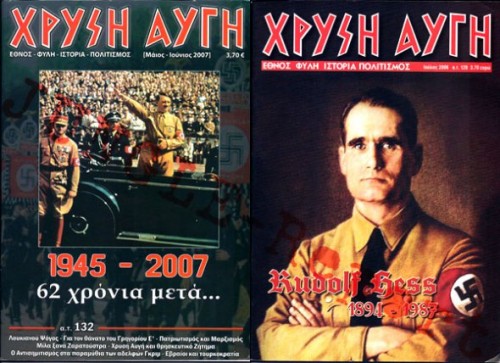 In other news, a tiny mob of nazis called ‘Squadron 88’ (88 = HH = Heil Hitler) has gained some media attention after some of the boneheads distroed a nazi tract in Bondi:

In brief, Squadron 88 is a new, ad hoc organisation consisting of a few young boneheads from Sydney closely aligned to the Australia First Party. Curiously, AF member David Pallor supports the boneheads: you may remember David from several years ago — when he had some legal difficulties arising from his sale of nazi merch (2008) — and more recently, when he failed to turn up to his own rally in Brisbane.

As well as producing shitty anti-Semitic samizdat, the groupuscule has been making a bit of a nuisance of itself in other ways. But moar on that later …

I live in Melbourne, Australia. I like anarchy. I don't like nazis. I enjoy eating pizza and drinking beer. I barrack for the greatest football team on Earth: Collingwood Magpies. The 2020 premiership's a cakewalk for the good old Collingwood.
View all posts by @ndy →
This entry was posted in Anti-fascism and tagged antifa notes, Australia First Party, Golden Dawn, Squadron 88. Bookmark the permalink.