Round 21, the second last round of the season, and I can report with unbridled satisfaction that Collingwood spanked Carlton with their soon-to-be-acquired wooden spoon.

Such, such are the joys…

In even better news for the Mighty Magpies, Alan Didak was tonight cleared of a charge of making a damaging head-high bump on Carlton’s Heath Scotland. 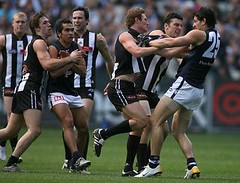 Above : Lacking focus, Carlton players Eddie Betts and Brendan Fevola express their upset at the memory of wooden spoons in 2002 and 2005… and at the prospect of a third in 2006!

I live in Melbourne, Australia. I like anarchy. I don't like nazis. I enjoy eating pizza and drinking beer. I barrack for the greatest football team on Earth: Collingwood Magpies. The 2023 premiership's a cakewalk for the good old Collingwood.
View all posts by @ndy →
This entry was posted in Collingwood, Poetry. Bookmark the permalink.