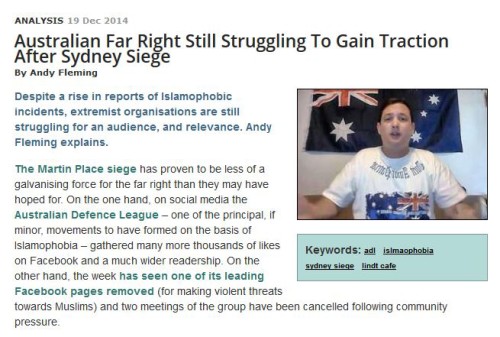 I wrote an article for New Matilda.

You can read it here.

Note that another Islamophobic organisation, the Patriots Defence League Australia, is meeting in Geelong on Sunday at the Rippleside Park Motor Inn.

I live in Melbourne, Australia. I like anarchy. I don't like nazis. I enjoy eating pizza and drinking beer. I barrack for the greatest football team on Earth: Collingwood Magpies. The 2021 premiership's a cakewalk for the good old Collingwood.
View all posts by @ndy →
This entry was posted in Anti-fascism, State / Politics and tagged Islamophobia, Martin Fletcher, Martin Place, new matilda, Nicholas Folkes, Nicholas Hunter Folkes, Nick Folkes, Party for Freedom. Bookmark the permalink.