In just over two weeks, flag-waving Islamophobes, White nationalists, neo-Nazis and other radical right-wing elements will be attending one of several rallies to ‘Reclaim Australia’ (RA) …

… from the Muslim ruling class. 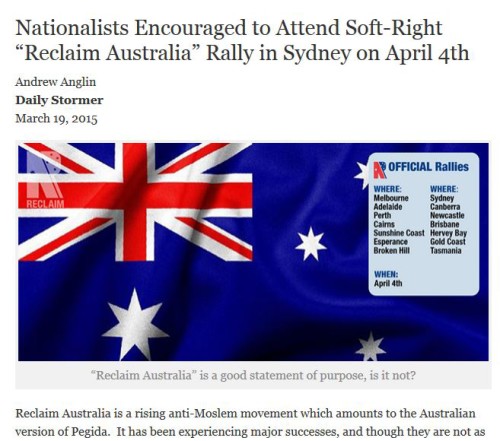 Daily Stormer believes that attendance at the rallies by neo-Nazis and White supremacists will provide them with good opportunities to meet like-minded individuals — and to recruit them. So does the Australia First Party, Nationalist Alternative and various other neo-fascist and neo-Nazi grouplets, including of course Nationalist Republican Guard (NRG) (see : slackbastard ~versus~ Australia First Party, Daily Stormer, Reclaim Australia (etc.), March 10, 2015).

NRG has for the last few months been joined by the face of RA, Shermon Burgess. Together they’ve produced a steady stream of YouTube videos promoting Adolf Hitler RA and warning Strayans about the dangers Muslims pose. NRG and Burgess’s videos are fairly poor-quality productions. In this sense, they’re very similar to Burgess’s previous expedition into music by way of ‘Eureka Brigade’ (EB). The band’s songs, inter alia, celebrated killing Muslims and burning down mosques.

Much of the material EB recorded has been removed from teh intarwebs, but some of their (appalling) efforts at making ‘Rock Against Communism’ muzak have been preserved on the ReclaimWhat site here. FWIW, Burgess’s bandmate, Alex John Wentworth, manages to capture the spirit of ‘patriotism’ on display at RA — and the easy-going nature Strayans are famous for the world over — in the following quip:

In other news, Iggy Gavrilidis, the leader of the Australian branch of Greek neo-Nazi party Golden Dawn, is reportedly one of the speakers at the Melbourne RA rally (though I doubt he’ll be making an appearance). Pastor Danny Nalliah is also rumoured to be appearing in Melbourne and if he does will presumably be bringing with him a carnival of Christian fundamentalists. Otherwise, the stellar cast of performers at the Gold Coast includes disgraced former soldier Bernard Gaynor and crank cartoonist Larry Pickering.

On another, bizarre note, a Sydney Hobart resident and Burgess fan named James Richard Gilhome has popped a detecting hat on his head and come to the conclusion that I’m some other fella named Robert Godino. How did the citizen detective arrive at this startling conclusion? Here, James explains how his bRanes works: 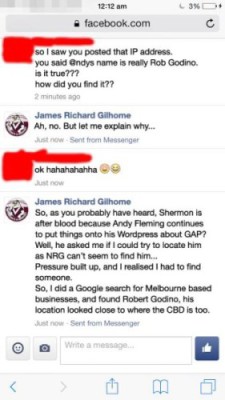 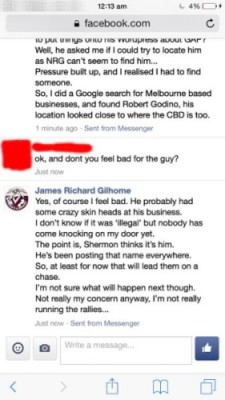 I suppose the only thing worth adding is that Gilhome’s cavalier attitude towards the possible repercussions for Robert Godino being identified as myself mirrors the attitude Burgess has towards working with convicted anti-Semites to promote patriotism.

Finally, organisers in Melbourne claim to have received approval from Federation Square management to hold their hate rally in the heart of town. If correct, it would be a rather remarkable PR venture for Fed Square, which has to this point been more commonly associated with the promotion of liberal multiculturalism rather than, say, murderous hatred of Muslims.