Zionists … I’m sick of hearing that coward word. Get some guts people and just say Jews, they are all Jews or Jewish servants. For thousands of years these Jews have been expelled and chased out of European Nations for the same shit. Napoleon and Hitler were the last to stand against them (please don’t reply to this comment with ‘muh holocaust’ bullshit, cause that is a load of crap too). I[‘]m fed up with all the tiptoe words like [I]lluminati and [Z]ionist … I’ve found that all these so-called ‘truth-seekers’ delve into free information until they hit the plateau of the real truth; that point at which they must admit that there is no [I]lluminati or [Z]ionist conspiracy, only a Jewish conspiracy. Very few people make it past that plateau, they are too pacifist and too egalitarian to accept the reality of the Jewish nature and so they become weird peace & love people who forever talk about the ‘universe’ because they failed to acknowledge the reality of racial dispositions of the Jews. There is no “new” conspiracy with an “[I]lluminati” or “Zionist” foundation, there is only Jews; the same old Jews from a thousand years ago practicing the same old shit, only now they are actually succeeding. 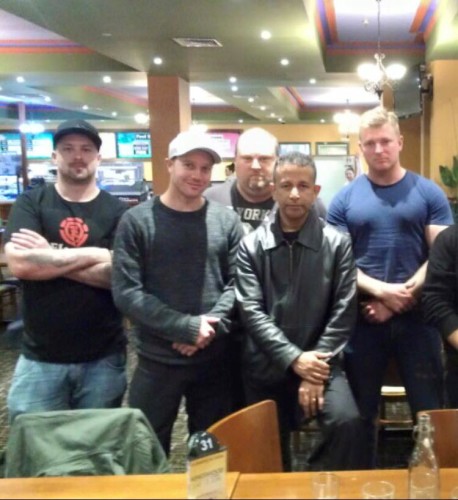 Above : Leader of the Rise Up Australia Party, Danny Nalliah, chillin’ with the United Patriots Front leadership (Blair Cottrell on far right).

1) Der Führer (Shermon Burgess AKA ‘The Great Aussie Patriot’) has declared that ‘patriotic’ members of the far right will be entering into a Grand Coalition in order to smash the left in Melbourne on July 18 (the date of the next ‘Reclaim Australia’ rally). As of this date, Burgess has declared that the alliance consists of Reclaim Australia and the United Patriots Front (two groups already on board with July 18), the Southern Cross Soldiers (a defunct group of white teenagers), a Facebook group called ‘Aussie Brotherhood’ and the (remnants of the) Australian Defence League. He further hopes to enlist the Australia First Party, the Patriots Defence League of Australia and a handful of other Facebook groups what hate Mooselems. (It seems likely that boneheads belonging to the ‘United Australian Front’ and the ‘Full Blooded Skips’ will also be ‘smashing the left’ in Melbourne on July 18.) 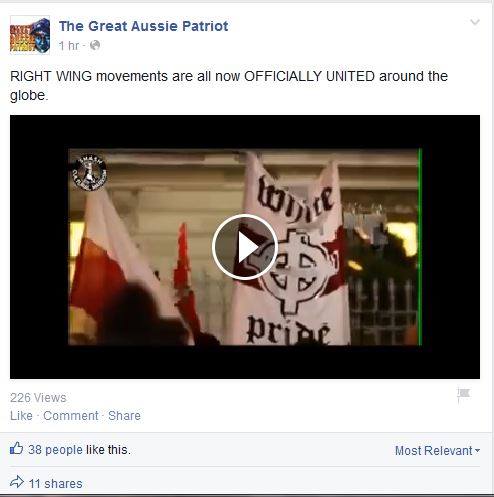 (On the Front National, see : Front National’s victory will have a serious impact on both France and the future of Europe, Aurelien Mondon, May 27, 2014 | On Svoboda, see : Who are Ukraine’s fascists?, Matthew N Lyons, threewayfight, March 4, 2014 | On Jobbik, see : Hungary heads to the right, Deutsche Welle, May 13, 2015 | On National Action, see : #hitlerwasright: National Action and National Socialism for the 21st Century, Paul Jackson, Journal for Deradicalization (2014) and Anti-Fascist Network (UK) on ‘National Action’ | Note: The Party of the Swedes — a neo-Nazi organisation — announced its dissolution in May 2015. In March 2014 the Party celebrated International Womens’ Day by attacking and stabbing a group of feminists. | On Forza Nuova, see : The BNP Partied with European Fascists in Rome This Weekend, Leonardo Bianchi, VICE, March 5, 2014 and Tear gas, clashes as anti-nationalist rally in N. Italy turns violent (VIDEO), RT, October 19, 2014 | The leadership of the neo-Nazi Golden Dawn party in Greece is currently on trial; in Australia, nominal XA Australia leader Iggy (Akis) Gavrilidis has expressed support for both RA and moreover UPF. See also : So who were these nazis anyway? Australia First & Golden Dawn in Brisbane, May 4, 2014 | On the (now-defunct) German neo-Nazi project “The Immortals”, see : YouTube Neo-Nazis: The Far Right Updates Its Online Image, Sarah Mühlberger, Spiegel Online, February 12, 2013 | On the National Rebirth of Poland (NOP), National-Radical Camp (Polish: Obóz Narodowo-Radykalny, ONR) and Polish fascism, see : The Rebirth of Radical Nationalism: Welcome back to the ’30s (November 17, 2012) | On Ataka, see : What’s left when you are (far) right in Bulgaria?, Nikolay Nikolov, Open Democracy, April 29, 2014.)

Burgess’s followers tend to be political illiterates so may only be expected to thrill at what they understand to be ‘patriotic’ movements in Europe. Those with some grasp of European politics will understand that the UPF consciously wishes to emulate extreme-right parties and movements. In any case, the context of Burgess’s declaration of unity is the following:

• The launch of the UPF on May 31 was not very successful. The UPF failed both to hold a rally outside the Richmond Town Hall and to ‘smash the left’ and attracted only a relatively small number of supporters (between about 50-70).
• The presence of the nazi (Glenn Anderson) in the t-shirt — and the failure not only to eject him from the rally but to instead welcome and march alongside him — has not played very well, either in the eyes of the general public or among a very small segment of the UPF’s followers.
• As a result, the UPF has been forced to revise its position on the groups (RA especially) previously denounced as weaklings and traitors. In other words, the UPF has demonstrated it has even more limited appeal than RA and to attract hundreds if not thousands of ‘patriots’ to rally in Melbourne on July 18 requires reconciling with RA as well as attempting to draw together the dregs of the ADL, PDLA and other, principally social media creations.
• The fact that the leadership of the UPF in Melbourne — Blair Cottrell and Neil Erikson — are neo-Nazis does not register with Burgess’s followers and has received zero attention in mass media reporting to this date.
• There’s ample opportunity — time and other resources — available to ‘the left’ in Melbourne to organise to oppose and disrupt the fascist rally on July 18. Whether it does so is an open question. See : RALLY AGAINST RACISM – Stop ‘Reclaim Australia’ – Melbourne and Melbourne Counter-Rally Against racism, Islamophobia and the far right.

2) In Perth, a small group (perhaps a dozen or so) of anti-Muslim activists gathered in order to … have a slave auction. Or something. Anyway, the rally was ostensibly called in order to express solidarity with persecuted Christian minorities in Muslim countries. I dunno who organised it but a large group of counter-protesters rocked up anyway.

3) In the northern suburbs of Adelaide, some bloke has been stuffing letterboxes with leaflets promoting neo-Nazi group ‘Blood & Honour’. It’s not clear from the Channel 7 news report which faction of B&H distroed the leaflet: one faction is aligned with the (Southern Cross) Hammerskins, the other ‘Combat 18’. In Melbourne, the principal propagandist for C18 is Patrick O’Sullivan, who in March was kicked out of a gig for distributing flyers promoting ‘Reclaim Australia’, but is mostly known for slapping up poor-quality B&W stickers around town denouncing Muslims and praising ‘White Power’.

Curiously, Neil Erikson — one of the leaders of the UPF in Melbourne along with Blair Cottrell — has links to both B&H factions, having attended gigs organised by SCHS/B&H in Melbourne as well as having “Aussie Aryan friends” in the loose network of boneheads that is C18 in the city.

4) Finally, a mysterious cat with the body of a man is suspected of having stolen political maverick Buddy Rojek‘s cap from him when he attended the UPF rally on May 31. Accordingly, Rojek has been making noises online about organising a protest at Channel 7 studios in Melbourne in order to castigate the media for failing to highlight this dread crime. 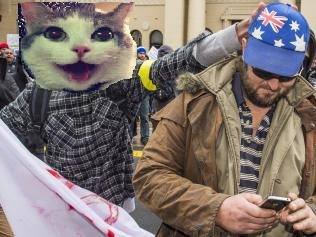