After an absence of many weeks, Facebook has opted to republish my original page, deleted after a campaign of mass reporting by radical right-wingers. The page may be found here and my back-up page here. No doubt both pages will continue to be subject to mass reporting so who knows how long they’ll stay up.

Australia First Party will support the next round of Reclaim Australia rallies in July.

The Australia First Party has jumped on board the Reclaim Australia (RA)/United Patriots Front (UPF) bandwagon — as has every far right group in the country, from the neo-Nazis of Nationalist Alternative through to Danny Nalliah‘s (Christian fundamentalist) Rise Up Australia Party. (Well, with the possible exception of Nick Folkes’ Party of Freedom.) The Melbourne RA/UPF rally is therefore shaping up as a Big Day Out for the far right, with the rally being aimed at both promoting Islamophobia and combating The Left. The emphasis upon Melbourne (other cities will be Reclaimed on July 19) reflects the difficulties experienced by Reclaimers on April 4 and the failure of the UPF rally of May 31. To supplement their rather meagre numbers of May 31, the UPF is collaborating with the remnants of the ‘Australian Defence League’ in Sydney to transport Islamophobes and ultra-nationalists by bus to Melbourne: 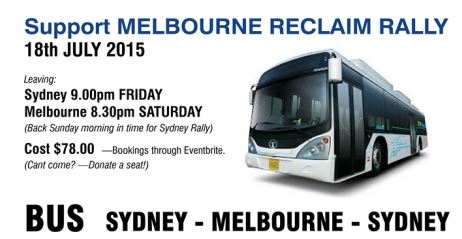 In addition to the joint RA/UPF rally in Melbourne, RA is organising rallies in other towns and cities across the country. Joining them will be counter-protesters. In Brisbane, Newcastle, Perth, Sydney and, perhaps, elsewhere …

… But headlines can mislead. The main terrorist threat in the United States is not from violent Muslim extremists, but from right-wing extremists. Just ask the police.

In a survey we conducted with the Police Executive Research Forum last year of 382 law enforcement agencies, 74 percent reported anti-government extremism as one of the top three terrorist threats in their jurisdiction; 39 percent listed extremism connected with Al Qaeda or like-minded terrorist organizations. And only 3 percent identified the threat from Muslim extremists as severe, compared with 7 percent for anti-government and other forms of extremism.

The self-proclaimed Islamic State’s efforts to radicalize American Muslims, which began just after the survey ended, may have increased threat perceptions somewhat, but not by much, as we found in follow-up interviews over the past year with counterterrorism specialists at 19 law enforcement agencies. These officers, selected from urban and rural areas around the country, said that radicalization from the Middle East was a concern, but not as dangerous as radicalization among right-wing extremists …