Note that Goldberg posted as ‘Michael Slay’ on US neo-Nazi website ‘Daily Stormer’ and was prolific on reddit as ‘European88’.

Like a large number of other neo-Nazis, fascists, White supremacists and other l00ns, Goldberg had a particular obsession with Australia and Australian politics, supposedly on the basis of laws considered to be overly-restrictive on ‘freedom of speech’ but just as likely because of its history as a White colonial-settler state. Joining him in batshit analysis of Australian conditions is Sydney-based Australia First Party member ‘Nathan Sykes’ (as ‘Hamish Patton’). Sykes/Patton’s latest series of contributions to the site include ‘Government Dumps Tony Abbott for Self-Described “Jew” Prime Minister’, ‘Jew York Times Jews Out on Oz’s ‘Stop the Boats’ Policy’, ‘Jews Again: Australian PM Compares ISIS to Nazis, Kikes Go Mental’, ‘Jews Cry “Double Holocaust” After Courtesy Mist Showers Installed at Auschwitz’, ‘Science Un-Racists White Babies in New White Genocide Program’ and ‘White Women Support Self-Genocide via Jew Programming’.

As well as contributing to Daily Stormer, Sykes/Patton was one of X number of neo-Nazis present at Reclaim Australia rallies in Sydney this year. Speaking of which …

• The United Patriots Front (UPF) has declared that it will be forming a political party.

Like UPF leader ‘The Great Aussie Patriot’ (Shermon Burgess) and his promise to make a pornographic film to fund his movement, it’s far from certain how seriously the endeavour should be taken, but if it goes ahead then the UPF will be entering a fairly crowded market, one including the (deregistered) neo-fascist Australia First Party, the Q Society’s Australian Liberty Alliance, Nick Folkes’ (unregistered) Party For Freedom (PfF), Pauline Hanson’s One Nation and moar.

• Speaking of Folkes’ and his Freedom, the PfF have organised an event in Cronulla to celebrate the 10th anniversary of the Cronulla riots. 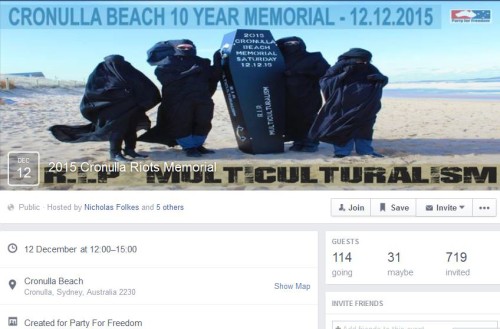 • In general, the far right is not. happy. that Tony Abbott has been junked by the Liberals for Malcolm Turnbull, widely understood to be a ‘communist’ , ‘left-wing’ and (hence) a ‘traitor’ to The Nation.

See : After Abbott: anti-Islam right-wingers confused about who to vote for, Michael Bachelard, The Age, September 15, 2015. 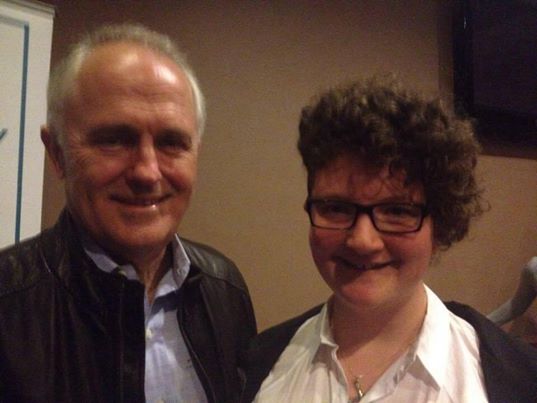 One local neo-Nazi who may be happy at Turnbull’s elevation to Prime Minister is Felicity Sharpe, here pictured with Turnbull at a function earlier this year. Sharpe featured in a blog post I done back in June: Felicity Sharpe, neo-Nazism, United Patriots Front … and xyz.net.au (June 22, 2015). I took it down at her request … only to witness her re-appear at the UPF rally in Melbourne on July 18.

• Finally, some news from other islands, in this case Dover in England, where neo-Nazis held a li’l rally against all them foreigners …