With the federal election rolling around soon, I thought I may as well take note of the electoral efforts of the far right. A mixed bunch, common themes are opposition to Islam, denial of anthropogenic global warming, and a mAd love of flag-waving (‘Australia for Australians’).

(Dr Jim Saleam’s) Australia First Party : AFP is standing several candidates, including party leader Dr Jim Saleam in Lindsay (NSW), Susan Jakobi in Lalor (VIC), ex-ONP candidate John Kearney in Solomon (NT) and Victor Waterson in McMahon (NSW). Saleam will be running against ex-Tory and Penrith councilor Marcus Cornish and Stephen Roddick of the Australian Liberty Alliance. One Nation in WA — ie, that faction not aligned with Pauline Hanson — appears to have merged with AFP for the purposes of running two losing candidates (Lyn Vickery and Brian McRea) for the Senate under the AFP banner. (The WA branch was chucked out of One Nation a few years ago.)

(Debbie Robinson’s) Australian Liberty Alliance : The ALA, the political project of ‘The Q Society’, is standing Senate candidates in every state, several lower house seats in NSW (Peter Kelly in Bradfield, Ron Pike in Farrer, Stephen Roddick in Lindsay, Carl Halley in Macquarie) and QLD (Tony Duncan in Bowman, John Spellman in Fisher, Shaun Spain in Forde, Matt Darragh in Griffith, Rob Windred in Hinkler, Caleb Wells in Longman) and one in WA (David Archibald in Curtin). They will be battling AFP leader Saleam in Lindsay and One Nation in Longman. Note that John Bolton (SA) was dropped from the ALA team and is now standing as an independent in Wakefield, while its most famous face is Gary ‘Angry’ Anderson (NSW). Along with Pauline Hanson, an ALA candidate seems the next most likely to win a Senate seat.

(Blair Cottrell’s) Fortitude (United Patriots Front) : Despite gaining a good deal of media and public attention over the last 12 months, staging an ‘East Coast’ Tour earlier this year, and having conducted several successful media/publicity stunts, the UPF has seemingly failed to attract sufficient support to register with the Australian Electoral Commission. It’s unknown if any of the small clutch of fascists and ultra-nationalists who form the UPF’s inner core will bother sticking their hand up for the election — a ‘seminar’ conducted at The Bush Pig Inn in Jackass Flat on June 5 attracted around 20 or so participants. In January, internal UPF discussion acknowledged that party fuehrer Cottrell was unable to run for public office because of his violent criminal record, while UPF Perth lackey Dennis Huts also worried that his own imprisonment for an unspecified crime might bar him from running. The stench the UPF carries around with it was confirmed by the hostile reception party fuehrer Cottrell received when he tried to jump on board the dairy farmers protest in Melbourne in May. See : Watch: Far-Right Leader’s Effort To Hijack Dairy Farmer Protest Backfires, New Matilda, May 25, 2016. 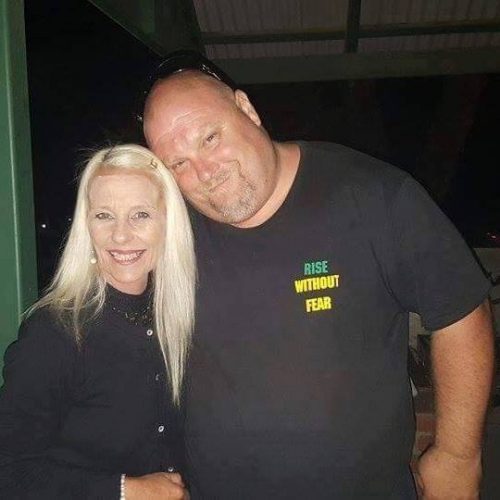 (Kim Vuga’s) Love Australia Or Leave Party : Like UPF/Fortitude, LAOL appears to have failed to register for the election. Vuga, whose main claim to fame is appearing on a TV show, will be running as an independent for the Senate in QLD and is joined by Karen Street in Tasmania (in April, Street replicated, with a whole lot less fanfare, the UPF stunt at a match in Hobart), Elizabeth Power and Tony Robinson in NSW and Ian Felton and Jeffrey Simmons in VIC.

*Just as Vuga’s party failed to register, so Karen Street, Elizabeth Power, Tony Robinson, Ian Felton and Jeffrey Simmons do not appear on the ballot; another Tony Robinson is an ALA candidate in TAS (along with Susan Horwood).

(Nick Folkes’) Party for Freedom : On June 4, the PFF staged another desultory rally in Sydney, this time in the suburb of Blacktown. The Big Idea being celebrated on this occasion was Getting Rid Of All The African And Muslim Immigrants To Australia. Ho hum. (A crowd several times larger than the roughly 20 or so individuals the PFF gathered told the racist meatheads to shoo.) As he’s done on numerous previous occasions, Folkes will be losing badly in whatever ring he throws his hat into.

*Folkes has abandoned his campaign.

(Pauline Hanson’s) One Nation Party : Perennial chancer Hanson has good prospects of being elected to the Senate according to pundits. In the intervening two decades since Hanson made her maiden speech in Parliament, the party’s rhetoric has changed from Australia being in danger of being ‘swamped by Asians’ to being ‘swamped by Muslims’. (Note that the party itself is apparently in danger of being swamped by ‘Asian wives’.) The party’s main competitor for the bigot vote would appear to be the ALA. Joining Hanson in her quest for a seat in the Senate in QLD is Malcolm Roberts, Fraser Anning and Judy Smith; the party is also running Senate candidates in NSW, SA, TAS, VIC and WA. In QLD, candidates for lower house seats are Troy Aggett (Blair), Brenden Ball (Fadden), Robert Pasquali (Fairfax), Phil Baker (Flynn), Geoff Virgo (Herbert), Damian Huxham (Hinkler), Peter Rogers (Leichhardt), Michelle Pedersen (Longman), Lynette Keehn (Maranoa), Brad Trussell (Oxley), Elise Cottam (Wide Bay) and Rod Smith (Wright): in Longman, ONP will be pitted against ALA. In NSW, Carter Edwards will be standing in Dobell, Graham Burston in Paterson, while Neil Smith is running in Richmond.

(Danny Nalliah’s) Rise Up Australia Party : God has told the Reverend that he’s gonna win BIG this time. Presumably. The party — which has formed an informal alliance over the last year with the UPF — is a fundamentalist, multi-ethnic Christian project opposed to multiculturalism and Islam and wants Australia to remain Australian (as opposed to Austrian, presumably). Pastor Danny Nalliah and deputy leader Rosalie Crestani will take a break from talking on God’s behalf in an attempt to address the Australian Senate from VIC, while Brian Tucker and Maree Nichols in NSW, Anthony Hardwick and Sheila Mundy in WA, Paul Taylor and Neroli Mooney in QLD, Jan Pile and Jimmy Gimini in the NT and Sandie O’Connor and Jess Wyatt in the ACT will be losing elsewhere. The party will also be praying to Jesus to ensure that the following all go to Parliament (and/or Heaven):

Oddly, Nicholas Steel (Corangamite) has stood for both the Australian Protectionist (2013) and One Nation parties (2007) previously.