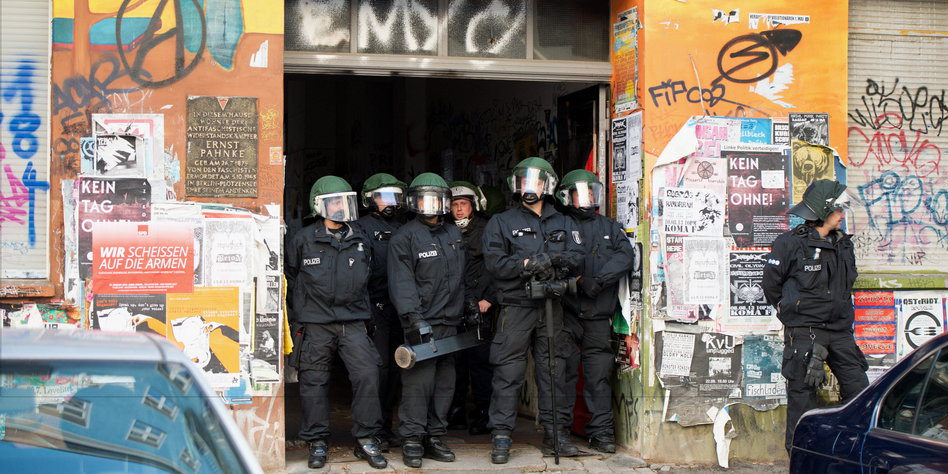 It has now been over a week since our doors were first cut off, cops and security intruded into our housing project, installing themselves in our stairways and other previously collective spaces. From then, the speedy and aggressive eviction and destruction of the ground level of our home began. Our social space, the Kadterschmiede, along with our workshop, laundry, attic and garden were stripped of all recognition in clouds of dust and mortar, while rubbish skips were filled with our belongings and collective histories.

Our rebellious, emancipatory project has been overrun by empty headed lackeys in uniform and we are pissed – not the least because we are used to better company than this. Whether these unwelcome wardens wear uniforms issued by the state or private security companies makes little difference to us. They both show their petty allegiance to the logic of domination and control not only via their presence but also through daily acts of physical violence, harassment, degrading comments and leers – not only directed towards us, but our visitors, friends and neighbours including young children. The police have set up a restricted area, closing off the entrance to the building and its surrounds, with anyone wanting to enter their home or visit us having to pass a gauntlet of beefed up aggressive cops and security, often needing to present identification. This process can take hours.

Further it has just been exposed that the police have been recording the details and compiling a database of people that have been identified coming into the house. At least part of this list has been passed on to and published by organised Nazi groups.

The pretext of this eviction is that the owner John Richard Dewhurst, a taxation lawyer, millionaire mega investor with companies implicated in The Panama Papers, and previously an attorney for the South African Supreme court during the apartheid era, wishes to house refugees in these spaces. If of course they can pay market rate rent in the newly renovated spaces, an amount too high for most people and above what refugee housing organisations can afford to fund. The irony of this claim doesn’t bypass us.

The clear instrumentalization of refugees as an excuse to attack a space that has shown political and practical solidarity with refugees and other people in precarious positions does not surprise us. For those in the most precarious positions are frequently pitted against each other under this current system that is set up to exploit us for the benefit of people like Dewhurst. To add salt to the wound, in this violent and invasive process three refugees who had found a home with us in the 94, can now no longer live here for fear of extra repression and police stress. The state and its most wealthy have once again moved to destroy safer solidarity spaces for those in our community whose struggles intensify on a daily basis.

The area around Rigaerstrasse has been heavily gentrified in the past decade and skyrocketing rents have seen many residents pushed out, displaced and evicted in order to make room for new developments. These are unaffordable to most existing long term residents but bring in more profit for investors. As part of a larger neighbourhood coalition of projects and individuals we have struggled against this process of gentrification, fighting to keep our neighbourhood a place for all, not just the rich. Over the past year or so we have seen the relationships of warmth and solidarity between people in our neighbourhood growing and people increasingly sharing daily life. Neighbours from both the projects and private living spaces have met and organised on the streets, in our garden and at the peoples’ kitchen in Kadterschmiede.

We understand the aggressive, overbloated attack on our collective spaces as part of the wider repressive conditions under capitalism. Conditions that see all elements of collective life and resistance attacked, commodified, co-opted and as a last resort destroyed and replaced by more controllable and consumable forms of life. We also recognize the power of collective spaces, campaigns, actions and initiatives in the face of the increasing pressure placed on all of us under a rotten and collapsing system that tightens the noose around all of our necks as it slowly drowns under the weight of its own bloated corpse. It is clear to us that the effectiveness and potentiality of these liberatory collective forms, including our own project, poses an increasing threat to this system and all those who benefit from it.

We will continue to fight for all projects, initiatives and spaces that provide space and opportunities to experiment with alternative ways of living under these shitful conditions, across all divisive borders imposed from above.

We invite you to join us in expressing our resistance and rage.

Your solidarity however expressed gives us strength and warms our hearts,

See you in the streets!