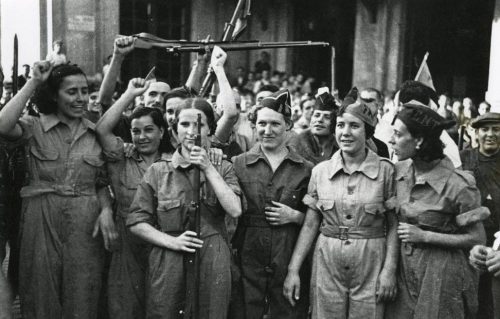 July 19, 1936 is the 80th anniversary of the outbreak of the Spanish Civil War and Revolution.

Next week, the ASF-IWA has organised a meeting to commemorate the occasion:

On the 19 July 1936, the CNT and the FAI launched the Spanish Revolution in response to the attempted coup by fascist Spanish army generals. The ASF Melbourne is holding an event at the Melbourne Anarchist Club with Vincente Ruiz Jr., son of CNT column commander, Vincente Ruiz and CNT veteran, Antonio Burgos, the last remaining veteran of the Spanish Revolution living in Australia. There will be a short presentation followed by a Q&A session.

In addition to the meeting, local anarchists belonging to the Grupo Cultural de Estudios Sociales de Melbourne have published two pamphlets about the revolution. The first, The Spanish Social Revolution, is published in Spanish and is a re-edition of a booklet originally published in 1975, a transcript of a conference given by compañero Ramon Liarte in 1973 at the meeting hall of the local federation of Bordeaux. The second, English-language pamphlet is titled A grass root C.N.T. militant remembers and is based on the oral memoirs of Luis Parés Adán (translated by Vicente Ruiz Jnr.).