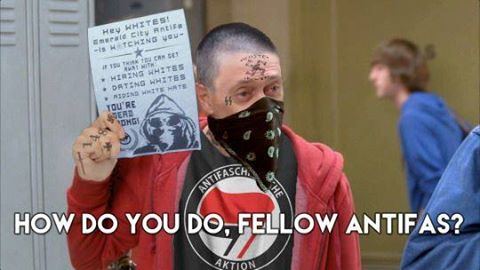 After those and other fake antifa-accounts were made well known, they and other newly created ones now use extremely obvious sarcasm, whereas many previously even copied the entire content of genuine antifa-accounts to seem legitimate.
In the cases of accounts that clearly pretended to be legitimate, they seem to now in many cases have deleted the content that was obviously meant to mislead.
Considering this change, the purpose of the original post has been fulfilled… by them.
On those grounds, it does not seem beneficial to post further updates to the previous list here.
If the behavior changes again, that stance might change and this revision’s notification be replaced by other content.

Note also that a silly ‘Antifa Australia’ Facebook page has popped up here, ‘Boston Antifa’ have been revealed as two right-wing nerds called Alexis Esteb and Brandon Krebs, while snopes ponders a fake antifa flyer here. My personal favourite fake is the Antifa Squad YouTube channel and this comment (posted on or about November, 2013):

Elsewhere, Lucy Battersby (Government suspends its YouTube advertising, amid concerns about where revenue goes, The Age, April 1, 2017) writes of some problems Google has in adhering to the corporate commandment ‘Don’t Be Evil’:

The global Google boycott keeps on rolling, with the Australian government the latest big spender to suspend advertising on Google’s YouTube platform.

Some YouTubers like Millennial Woes – a Scotland-based video blogger who posts bigoted monologues – claim to be able to make a living from their posts, according to one expert on far right groups.

And in Australia groups like the far-right United Patriots Front use social media to reach out to supporters.

“Blair Cottrell and the United Patriots Front use Facebook as their main platform, not YouTube. And while they have a real large audience and some of their Facebook videos reach millions, these are not monetised by them but rather by Facebook,” another expert said.

The UPF has tried to use crowd funding to raise money, but these are usually shut down by appeals to the platform for breaches of terms of service, he added.

• Speaking of Neil Erikson’s (former) friends: ‘Michael James Holt, 26, has pleaded guilty to a string of firearm manufacture and possession charges, including manufacturing a gun without a licence, after police found a large stash of guns and weapons across three properties in 2015 … [Holt] remains in custody and is due to be sentenced on April 12.’ Previously, Erikson had enthusiastically agreed with Holt about the desirability of arranging for the mass execution of ‘mudbloods’ at Federation Square — while selling fairy floss, popcorn and showbags. 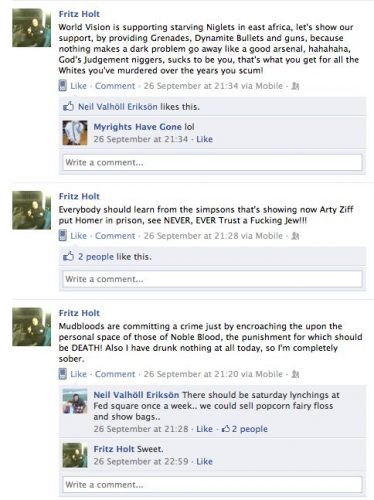 • Another Top Bloke to have attached himself to the neo-Nazis in the UPF is Canberra’s most impressive cement renderer, Nathan Davidson. Davidson, who while the subject of a suspended sentence for a conviction of assault occasioning actual bodily harm in 2013 and on bail for traffic matters, got busted in early 2016 with drugs and guns and stuff. Word on the street is that the naughty naziboy got a slap on the wrist and is currently serving a community order.

• Josh Dukes, the antifa who got shot by a Milo Y fan in Seattle in January, has been interviewed by Teh Grauniad: ‘I refuse to be like them’: why the man shot while protesting Milo Yiannopoulos doesn’t want revenge (Julia Carrie Wong, April 4, 2017).

• Finally, ABC’s 4 Corners has profiled Pauline Hanson’s One Nation Party. In a mildly amusing episode (Please Explain), PHONy is revealed as a political plaything for Our Pauline, her gormless followers rich pickings for the chancers that assemble under her banner, and otherwise rather similar to PHONy of the 1990s, with Muslims now replacing Asians as the boogeyman of choice — and the Tories much happier to play along. (Of passing interest is the financial support given the party by multi-millionaire property developer Bill McNee, who has also donated fat sums to the Tories.) See also : antifa notes (march 14, 2017) : One Nation Party too sophisticated for WA; UPF Go To Court; boneheads; ‘Alt-wrong: The Australian right is startling for its incoherence’, Richard Cooke, The Monthly, April 2017:

There is a pat explanation available, where Pauline Hanson is simply the antipodean franchise of a global movement of right-wing populism. Like Nigel Farage in the United Kingdom, or Marine Le Pen in France, or Geert Wilders in the Netherlands, she has been a chronic presence. Like them she has undergone decades of gestation, from a larval stage on the fringes of discourse to a resplendent full expression in the mainstream of politics. But, so far, this rise of the right has proved abortive for Hanson. Unlike them, she is unlikely to contest anything as monumental as Brexit, or challenge for the leadership of her country. Unlike them, she is also one of the least coherent politicians of her era.