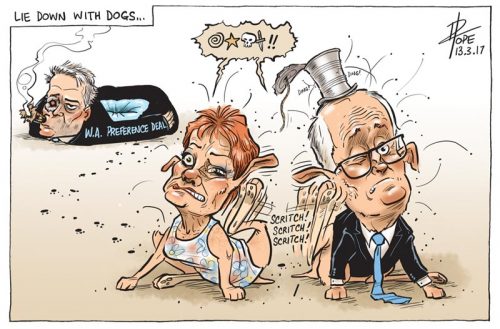 The One Nation Party proved to be a bit too sophisticated for the electorate in Western Australia on Saturday, March 11, averaging just under 5% of the vote in the legislative assembly (about 8% in the seats the party ran candidates in). While vote-counting is ongoing, of the 30+ candidates ONP ran, the best performing (10%+) were in Central Wheatbelt, Kalgoorlie, Mandurah, Moore, Murray-Wellington, North West Central*, Pilbara, Swan Hills and Warnbro (*Dane Sorensen was kicked outta ONP after his nomination). The party fared much better in the legislative council, however, where it appears that Our Pauline will have anywhere from one to three allies once the final votes have been tallied. (Note that the gerrymander in WA means that the 3/4 of the WA population what live in the Perth area elect 18 MLCs, while the other 1/4 what live outside Perth elect the same number, giving the Nationals and rural constituencies a disproportionate influence in the legislative council.)

Despite these rather meagre results (preceded by a shambolic election campaign), ‘Liberal puppet’ and party ‘dictator’ Pauline Hanson has declared that the election results ‘fantastic’, and Malcolm Turnbull has refused to rule out the Tories once again directing preferences to their parliamentary allies in ONP. 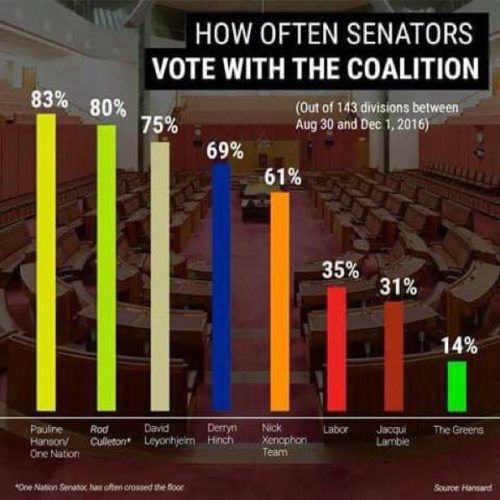 On Monday, March 6, Blair Cottrell, Neil Erikson and Chris Shortis appeared in Melbourne Magistrates’ Court for a mentions hearing. While all three were members of the United Patriots Front (UPF) at the time of their alleged offences (October 2015), in late 2015/early 2016 Erikson departed the UPF (but continued to be a Facebook warrior under various labels) while Shortis joined the Australia First Party in early- to mid-2016. Currently, the UPF is reduced to Cottrell and Thomas (Tom) Sewell in Melbourne and Dennis Huts and Kevin Coombes (‘Elijah Jacobson’) in Perth, along with a smattering of fanboys and fangirls across the country and a small army of Facebook fans.

The Campaign Against Racism & Fascism organised a small rally outside the court, which Erikson attended dressed in Muslim drag alongside George Jameson of the Party For Freedom. The boys were joined by several dozen supporters of AFP and UPF; the next scheduled court hearing has been set for May 23. Also attending court were the Million Flag Patriots, the most prestigious, unbashable & patrioty neo-patriot group in Australia. (See : United Patriots Front members’ court appearance sparks rally in Melbourne, Cameron Best, ABC, March 6, 2017.)

This week, the Victorian government has announced the introduction of a bill meaning that Rioters who wear face coverings while taking part in violent protests could face up to 15 years behind bars (ABC, March 13, 2017).

Attorney-General Martin Pakula said the legislation, which will introduce a new offence of violent disorder, will be introduced to Parliament next week.

“Too often we see at these events people turning up with masks and face coverings to try and hide their identity or to shield themselves from the effects of capsicum spray,” he said.

So: protecting your identity and shielding yourself from capsicum spray are now to be criminal offences.

This bonehead was spotted in Ballarat Daylesford on the weekend: chill out, bro. 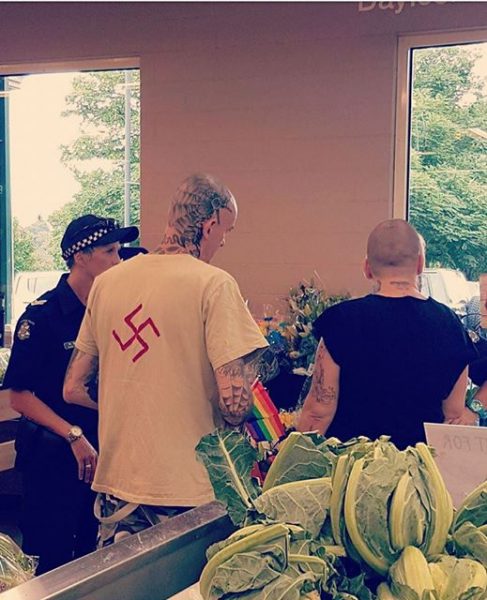 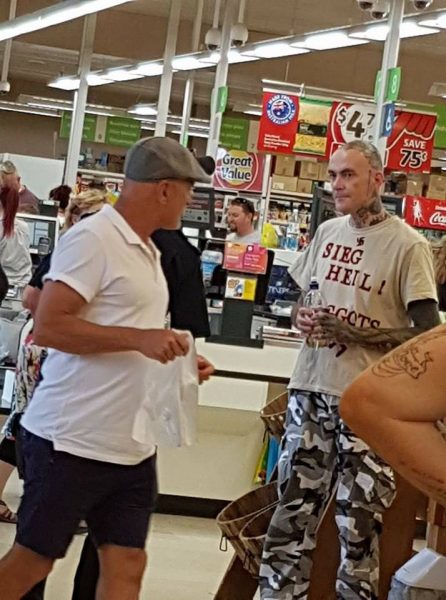