1) ‘The Radical Right in Australia’

OUP has published an essay on ‘The Radical Right in Australia’ by myself and Aurelien Mondon which you can read online or download for free here. The chapter is one of many in The Oxford Handbook of the Radical Right (edited by Jens Rydgren) which will be published in hard-copy in a few months and which is intended to provide the reader with ‘an authoritative state-of-the-art overview of the scholarship on the contemporary radical right’.

Compared to its European counterparts, Australia was for the most part spared the rise of powerful extreme right movements, and at times appeared immune to their appeal. However, rather than immunity, the absence of extreme right politics can be explained by the ability and willingness of mainstream politics to readily, openly, and officially absorb such values. This chapter discusses how, for most of the country’s history, Australian mainstream politicians suffocated the extreme right, not merely by borrowing some key ideas of the extreme right, but by negating entirely its ability to appear as an alternative to the power in place. It then turns to the 1990s and explores the rise of Hansonism and its impact on mainstream politics. The final part of the chapter is dedicated to the current state of radical right politics in Australia.

Leaving to one side the horrific nature of the alleged crime, it’s worth noting that the Aryan Nations played host to members of the United Patriots Front (now known as ‘The Lads Society’) when they visited Perth in November 2015 in order to both attend a Reclaim Australia anti-Muslim rally as well as to announce the formation of their political party, ‘Fortitude’. Indeed, the announcement by Blair Cottrell — in the company of Melbourne-based UPF members Neil Erikson, Chris Shortis, Tom Sewell and Linden Watson and Perth-based members Kevin Coombes (‘Elijah Jacobson’) and Dennis Huts — would appear to have taken place in the same property which, just a few months later, was the site of the grisly murder by their Perth neo-Nazi kameraden. 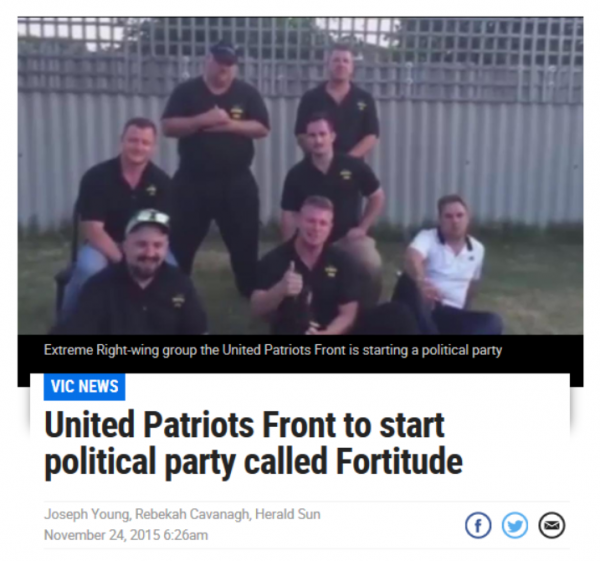 Closer to home, local superhero Daniel Jones has been in the news, touting his business and the virtues of vigilantism.

Daniel Jones, the owner of martial-arts school Tactical Force Combatives, is in the early stages of setting up a “community response group” to deal with thugs and criminals despite police discouraging the plan.

Mr Jones said he had no fear of being harmed physically while confronting offenders.

He denied the group would act as vigilantes but rather said it would provide a community service where people in “distress” could contact “interested parties in the local area that would be able to rush to their assistance”.

“We’re not vigilantes because we don’t want to hurt people, we just want to help people who are in danger,” Mr Jones said.

“I’d prefer to handle any situation verbally but it wouldn’t concern me if it did get physical because I’m more than capable [of] dealing with aggressive behaviour.”

Mr Jones specialises in Krav Maga, an Israeli military self-defence system, and has experience as a security guard.

He said anyone “smashing in a front door” would most likely flee when his team arrived.

However, Victoria Police were quick to discourage the plan … 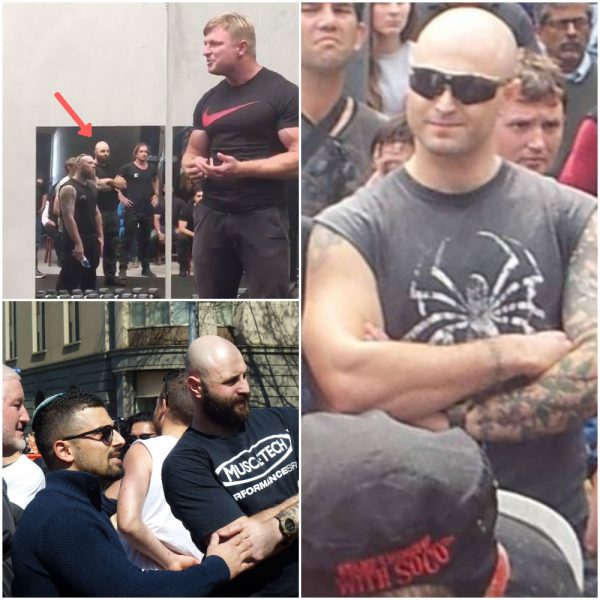 Daniel certainly gets around the traps, sticking his face in at Reclaim rallies in 2015, acting as bodyguard to Avi Yemini at his rally against crimens in September and at the MILO stoopid in December 2017 and more recently palling around and conspiring with neo-Nazi Blair Cottrell at the nü neo-Nazi clubhouse in Cheltenham (at a meeting to talk about taking on #AfricanGangs).

In the United States, billionaires and their right-wing foot-soldiers on college campuses are stepping up attacks on academics and higher education.

• Far-right attacks on faculty hurt us all, Jessie Daniels, Clarion, February 2018: ‘The increasing attacks on faculty are part of a well-funded and orchestrated campaign by the far right. Their strategy is to use social media to discredit academics and thereby devalue higher education.’
• No Re-Turning Point, U.S.A., The Baffler, Maximillian Alvarez, January 26, 2018: ‘From the “Professor Watchlist” to Tariq Khan, TPUSA’s campaign to silence opposition.’
• The Eye of the Troll Storm: Tariq Khan Interview with It’s Going Down, Black Rose/Rosa Negra, February 10, 2018:

In November, PhD student of history in Illinois, father, and Air Force veteran Tariq Khan, found himself in the center of a whirlwind of controversy, and a punching bag for a variety of Alt-Right and Alt-Lite blowhards – from InfoWars, to Gavin McInnes, to Anthony Scaramucci. Tariq stood accused of getting into a verbal argument with other students following a Trump protest, and the video of the argument, which shows people yelling at each other and ends in a phone being dropped on the ground, surfaced on the website, Campus Reform, the media wing of Turning Point USA. TPUSA is a growing collection of paleoconservative and Alt-Lite Libertarian students on campuses across the US, is financially backed by massive foundations and billionaires like the Koch Brothers, and is most known for harassing professors and students, often leading to individuals receiving massive amounts of death threats.

• Neo-Nazi organiser Elliott Kline (‘Eli Mosley’) was the go-to guy for JJJ’s Hack current affairs program back in August, called upon to explain to The Kids what happened in Charlottesville; he’s now been featured in an article for The New York Times (How Our Reporter Uncovered a Lie That Propelled an Alt-Right Extremist’s Rise, Emma Cott, February 5, 2018) which calls into question a number of aspects of his biography. Fingers xed, JJJ will have him back on to explain How Jews Control The Media. Oh, and in California, police have been collaborating with neo-Nazis in order to bring about prosecutions of anTEEfa (and otherwise being a nanny-state to fascists). See : California police worked with neo-Nazis to pursue ‘anti-racist’ activists, documents show, Same Levin, The Guardian, February 9, 2018.

• Finally, in the birthplace of Fascism, things are once again looking promising for the movement as a recent fascist terrorist attack ‘has highlighted the growing threat of Italy’s far right in the lead-up to the March 4 elections’ (Italy’s New Racist Storm, Richard Brodie, Jacobin, February 9, 2018).