It’s been almost a month since my last post (July 25), so the following is just a few brief notes re some of the events that have transpired in the intervening period …

Not surprisingly, the ‘Unite The Reich Right’ rally of August 12 has generated a great deal of discussion, which it would be impossible to summarise here. Certainly, a number of folks in the US and elsewhere have expressed varying degrees of shock and outrage, both at the sight of over 1,000 neo-Nazis, fascists and White supremacists (supplemented by small groupings of armed militants) staging a militant rally, and the murder of a counter-protester, Heather Heyer, by a nazi belonging to one of its constituent groups (‘Vanguard America’). FWIW, the CrimethInc podcast of August 14 provides what I think is the most useful accounts of events that I’ve encountered, while It’s Going Down continues to provide rolling coverage and analysis of the fallout from Charlottesville (and much more besides). Also useful reading is Jason Wilson in The Guardian — his recent interview with Corey Pein for Pein’s News From Nowhere podcast is also worth listening to — and Spencer Sunshine on Colorlines.

Closer to home, last week there was a minor brouhaha involving yoof radio JJJ and its news and current affairs program, Hack. Hosted by Tom Tilley, Hack decided to report on the events in Charlottesville by inviting one of its neo-Nazi organisers, ‘Eli Mosley’, on to the show to talk shit and to ensure that the ABC met its obligations to provide a platform for nazi propaganda (or something). Mosley — whose real name is Elliott Kline — has a brief history as a neo-Nazi organiser, and is one of thousands who’ve assumed this role in the wake of Trump’s becoming El Presidente. Writing for Andrew Anglin’s neo-Nazi Daily Stormer site regarding a Trump supporters rally in Philadelphia in March, Kline (Philly March Ground Report: Cops and Trumpenkriegers Work Together to Defeat Kikes and Antifa Faggots) writes that:

The boys are back in town.

On Saturday afternoon hundreds of marches took place across the Trumpenkrieg in support of Trump. In Philadelphia, the city of faggotry love, played out an alliance between the Nazi led marchers and local police departments against their oven-dodging enemies.

Up to their typical tricks again, not a single Shlomo-ran media outlet covered the event accurately. Of course. Luckily I was able to cover the event from on the ground to prevent the spread of fake news.

A thinker as well as a doer, Kline concludes his examination of the bigly nazi victory as follows:

So what does this event mean in our struggle for total Aryan Victory? This is a sign that we have moved into a new era in the Nazification of America. Normie Trump supporters are becoming racially aware and Jew wise. They are willing to stick up for themselves side by side with Nazis without being adverse to violence. The police departments are begging for the return of law and order and love jokes about hooked-nose merchants, but need our help in getting strongmen elected so they can do their jobs. Antifa and the kike media are so dumb they can be tricked by a monkey in a police uniform. All of this while the media continues to cover antifa in a positive light while demonizing all Trump supporters and law enforcement, further pushing them into our arms.

So: is the neo-Nazi organiser of a neo-Nazi event, at which an anti-fascist protester was murdered by one of the neo-Nazis attending the event, really the best person for Australian yoof to gain a better understanding of the meaning and significance of Charlottesville? Apparently so. The stoopid was further compounded, however, when Hack put to air a call by a nazi troll, ‘Herschel from Brisbane’. So: not only did the episode feature an interview with a neo-Nazi organiser, it also put to air neo-Nazis posing as Jews (you can read some channers discuss the raid here).

Not everybody was opposed to Tilley’s decision to give a neo-Nazi platform to talk, however: Andrew Bolt thought he did a great job.

In terms of the reaction by denizens of the local far right to the murderous adventures of their American kameraden, their glee-filled commentary is available on Facebook, in the comment threads on Andrew Bolt’s ‘blog’ and in all the usual places. Two notable examples (both since DELed by their authors) are the reactions of former ‘United Patriots Front’ leaders Blair Cottrell and Neil Erikson: 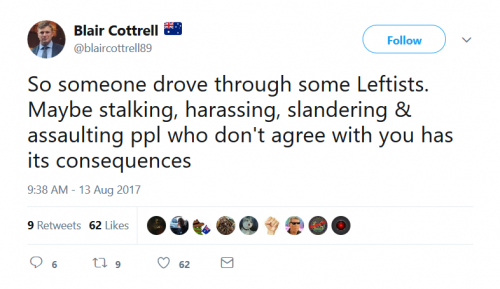 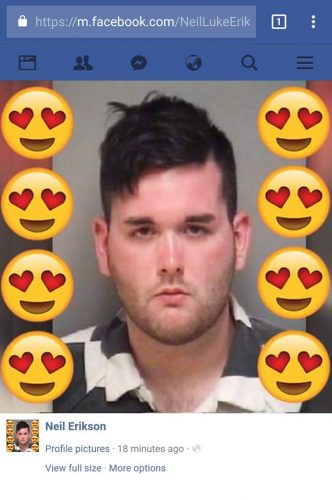 Ho hum. The pair, along with Chris Shortis, are due back in court in September to face charges of serious religious vilification. Oh, and speaking of patriotik volk making appearances in court, Phill Galea had another a few weeks ago, and will be back again in November:

A pre-trial court hearing for an anti-Islam extremist accused of plotting bomb attacks in Melbourne has been delayed while senior legal counsel is sourced.

Phillip Galea, 32, is accused of making preparations for terrorist attacks against properties occupied by Melbourne anarchist groups between November 2015 and August 2016.

He ordered potassium nitrate for smoke bombs, aligned himself with right-wing and neo-Nazi groups and researched how to make improvised explosive devices, ballistic armour and firearms, prosecutors said.

The case had been set down for a two-day committal hearing at the Melbourne Magistrates’ Court, but on Thursday the court was told the matter would not go ahead while Victoria Legal Aid secured a senior counsel to act for Galea.

There was no application for bail and Galea was remanded in custody until his matter is listed again on November 13.

• Michael Brull examines what happened when local boofhead (and tireless self-promoter) Avi Yemini tried to team up with fascists to organise a protest in Sydney in A Synagogue Beat-Up, Nazis In Bondi And The Strange Ambivalence From The Jewish Leadership (New Matilda, August 14, 2017);
• Among the mountains of dross in the state/corporate media re ‘antifa’, this article by Mark Bray stands out as one of the most useful: Who are the antifa?, The Washington Post, August 16, 2017;
• Some local nazis have jumped on board the hatewagon in opposition to same-sex marriage (Neo-Nazis Are On The Frontline Of The Campaign Against Marriage Equality, Osman Faruqi, Junkee, August 22, 2017). Note that, according to the Prime Minister Malcolm Turnbull, the nazi-produced and distributed ‘Stop the Fags’ posters are a legitimate part of the public debate on the question of marriage reform (#TrueStory);
• I’ve read but not finished reviewing Angela Nagle’s Kill All Normies (Zer0 Books, 2017) but following Charlottesville, Nagle has penned ‘Goodbye, Pepe’ for The Baffler (August 15, 2017), stating that:

But I believe now that Charlottesville marks the end of a significant phase of the alt-right. Their seemingly rapid growth was fueled—or at least bulked up—by an online culture of shared hatred for the cultural left. This collective reflex acquired an ironic, countercultural edge among a growing corps of transgressive shitposters and anti-PC trolls—and was duly amplified by a media infatuation with everything subcultural and extremely-online.