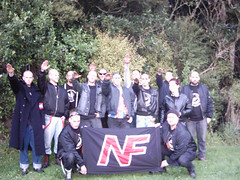 Australasian anti-fascist campaigners Fight Dem Back! are appalled at the hospitality shown to the New Zealand National Front (NZNF) [pictured above, scaring children] by the Top 10 Hutt Park Holiday Park. The holiday park, part of a nationwide chain, is to host the fascist group for two nights, during which time they will hold their AGM and a rally at the Cenotaph.

The NZNF are to stay at the park on Friday 20th and Saturday 21st October, with their AGM to be held on Saturday afternoon.

“It is an absolute disgrace that this park is putting out the welcome mat for a group of organised racists. In recent years NZNF members have been linked to the theft of explosives [1], racist attacks on Somali youths, vandalism of Maori carvings [2] and attacks on Mosques and Jewish cemeteries” said Fight Dem Back! spokesperson Asher Goldman.

“The NZNF have stayed at the same holiday park in previous years, and the owners of the park cannot be in any doubt as to their beliefs. With swastikas and other fascist symbolism tattooed onto many of their bodies, their abhorrent beliefs are there for all to see” said Goldman.

“While the holiday park tries to project a family friendly image, its actions in hosting a violent group of racist thugs such as the NZNF show where its true sympathies lie,” said Goldman. “The NZNF do not deserve to be given a platform from which to spread their vile message of hate.”

Call or email the Top 10 Hutt Park Holiday Park and let them know how you feel about them hosting fascists.